The document Properties of Metals, Stress (Part - 1) - Strain and Elastic Constants Civil Engineering (CE) Notes | EduRev is a part of the SSC Course Solid Mechanics.
All you need of SSC at this link: SSC

PROPERTIES OF METALS:1. Ductility:-Ductility is the property by virtue of which material can be stretched to a reduced section under the action of tensile force. Large deformations are thus possible in ductile materials before the absolute failure or rupture takes place, some of the examples are mild steel, aluminium, copper, manganese, lead, nickel, brass, bronze, monel metal etc.

2. Brittleness:-Brittleness is the lack of ductility i.e. material can not be stretched. In brittle materials, failure takes place with a relatively smaller deformation. This property is undesirable. For brittle materials fracture point & ultimate points are same, and after proportional limit very small strain is seen. Some of the examples are cast iron, concrete and glass.

3. Malleability:-The property by which a material can be uniformly extended in all direction without rupture. A malleable material possess a high degree of plasticity. This property is of great use in operations like forging, hot rolling, drop (stamping) etc.

4. Toughness:-The property which enables materials to absorb energy without fracture. This property is very desirable in case of cyclic loading or shock loading.

-The “Modulus of toughness” is measured as area under entire stress-strain curve and is the energy absorbed by material of the specimen per unit volume upto fracture stage.

5. Hardness:-Hardness is defined as the resistance to indentation or scratching or surface abrasion.

Based upon this there are two methods of hardness measurement :(i) Scratch hardness - Commonly measured by Mohr's test.(ii) Indentation hardness (abrasion) measured by:

The behaviour of material under variable loads (dynamic loads) is referred to as “fatigue”. In recent past several failures of structures have been noted due to fatigue.Factors affecting fatigue are :(i) Loading conditions(ii) Frequency of loading(iii) Corrosion(iv) Temperature(v) Stress concentration

7. Creep & Stress Relaxation:-At any temperature, a material will progressively deform with the passage of time under constant loading, even if the stress is below yield point, this phenomenon is called creep. However such deformation is negligibly small at lower temperature.-At higher temperature, due to greater mobility of atoms, most of the materials loose their strength and elastic constants also get reduced. Hence greater deformation at elevated temperature results even under constant loading. Therefore creep is more pronounced at higher temperature, hence it must be considered for design of engines & furnaces.-The temperature at which the creep becomes very appreciable is half of the melting point temperature on absolute scale and is known as “Homologous temperature”.-If a wire of metal is stretched between two immovable supports, so that it has an initial tension stress so. The stress in the wire gradually diminishes, eventually reaching a constant value. This process, which is a manifestation of creep, is called “Stress relaxation”. Important Points to be noted :

2. Ideal curve for tension is shown, however actual behaviour is different and indicates apparently reduced yield stress in compression for mild steel. The divergence between tension and compression results it is explained by Bauchinger and is called “Bauchinger effect”.

3. The stress is defined as the ratio of load to original area (Ao) It is also known as ‘engineering stress’ or ‘stress’ or ‘nominal stress’.Engg. stress ‘or’ Nominal stress =

On the contrary when changing area is taken into account, the ratio of load to actual area (A) is called ‘true stress’.True stress = P/A

SIMPLE STRESS AND STRAIN:-It is the internal resistance offered by the body against external loading or deformation. Stresses may be of following type :(i) Direct stresses or normal stresses which may be tensile or compressive.(ii) Shear or Tangential stresses.(iii) Transverse or Bending stresses.(iv) Torsional or Twisting stresses.-For direct stresses, if area under consideration is original area, then it is known as engineering stress or nominal stress or simply stress. But, if the area taken is actual area, then stress is known as true stress.

here, Ao = Original area of specimenA = Actual area of specimen-When a prismatic bar is subjected to axial load, it undergoes a change in length. This change is length is usually called deformation. The deformation per unit length of the bar is termed as strain. Since strain is deformation per unit length, it is a dimensionless quantity. But sometimes in practice, strain is recorded in forms such as mm/m or µm/m etc. 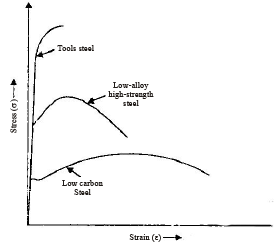 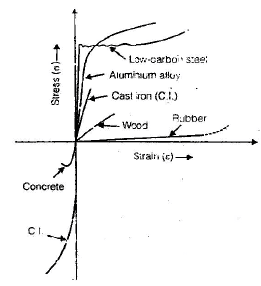 1. Hooke’s Law-It states that within elastic limit stress for most of the metals is proportional to strain.

2. Proof Stress:-When a material such as aluminium does not have an obvious yield point and yet undergoes large strains after the proportional limit is exceeded, an arbitrary yield stress may be determined by the offset method.-A line parallel to initial linear part is drawn, which is offset by some standard amount of strain such as 0.2%. The intersection of the offset point (A) defines the yield stress of offset yield stress, which is slightly above the proportional limit and is called proof stress. 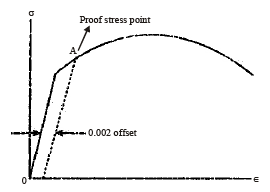