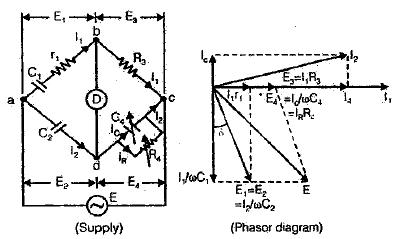 Let C1 and r2 are the unknown quantities

Equating real part we get,

Equating imaginary part we get,

AC bridges through which frequency can be measured : 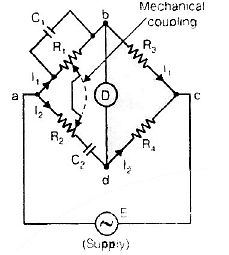 Equating real part we get,

The different Methods used for measurement of medium resistance are:

Ammeter connected near the load:

Let Ra be the resistance of the ammeter.

Let RV be the resistance of the voltmeter.

∴ Current through the voltmeter.

Now, true value of resistance is:

Now equation may be written as,

⇒Thus the measured value of resistance is smaller than the true value.

r = regulating resistance and there is a switch for putting R and S into the circuit alternately.

where, θ1 = the deflection with standard resistor.

θ2 = the deflection with unknown resistor in circuit.

G is the galvanometer. 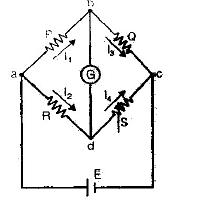 where, R is the unknown resistance.

S is called the ‘standard arm’ or known resistance of the bridge.

and P and Q are called the ratio arms for bridge balance, we can write

for the galvanometer current to be zero, The following conditions also exist:

where, E = emf of the battery. From the equation; 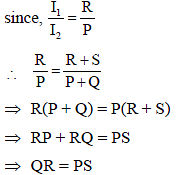 Carey-Foster Slide-wire Bridge :  This method is used for the purpose of determining the difference between the standard and the unknown resistances. 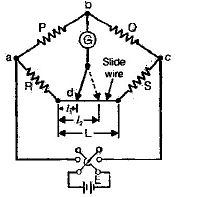 • Exact balance is obtained by adjustment of the sliding contact on the ide-wire.

Let l1 be the distance of the sliding contact from the left-hand end of the slide wire. The resistances R and S are then inter-changed and balance is again obtained. Let the distance now be l2.Ist case : For the Ist balance,

Where r is the resistance per unit length of the slide wire.IInd case : For the 2nd balance,

where L is length being included between R and S.Now, from equation

Here, I1 and I2 are current terminals V1 and V2 are voltage terminals.

⇒ Ammeter-voltmeter methods are already discussed in this chapter previously. 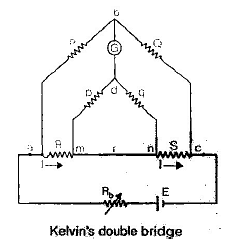 • The first set of ratio arms is P and Q. The second set is of ratio arms, P and q which is used to connect the galvanometer to point d at the appropriate potential between points m and n to eliminate the effect of connecting lead of resistance r between the known resistance, R and standard resistance S.• The ratio p/q is made equal to P/Q. Under balance conditions there is no-current through the galvanometer, the voltage drop between a and b i.e. Eab is equal to voltage drop Eamd between a and c.Now,

⇒ This equation shows the usual working equation for the Kelvin bridge.⇒ It indicates that the resistance of connecting lead, r1 has no-effect on the measurement, provided that the two sets of ratio arms has equal ratios.

Potentiometer Method :• This method is a comparison type method. Measurement using comparison methods are capable of a high degree of accuracy because the result obtained does not depend upon on the actual deflection of a pointer, as is the case in deflectional methods, but only upon the accuracy with which the voltage of the reference source is known.

Measurement of High Resistance :• The different methods employed are :

• High resistance of the order of hundreds or thousands of megaohm are often encountered in electrical equipment, and frequently must be measured.

Note :⇒ Problem of leakage current can be eliminated by using guard circuit.⇒ In loss of charge method, on the principle of discharging of capacitor through unknown resistance, for high resistance value.⇒ Meggar method is used for measurement of insulation resistance and earth resistance.