i.e. D Zener> D avalanche > D-ordinary.3. The reverse bias voltage applied relatively higher of the order of 8 to 10 V depending upon doping.4. The width of the depletion layer is relatively more than that in the diode with Zener breakdown.5. Since the reverse bias voltage applied is relatively large, a free charge carrier say an electron acquires high K.E and strikes an atom.The covalent bond is broken and other free-electrons are liberated so that now there are two free electrons available for conduction.6. Since the applied voltage is maintained high, there two electrons again acquire high K.E, striking other atoms and liberating two more free electrons and so on.7. At a given voltage called the avalanche breakdown voltage, a number of free charge carriers are available to avalanche multiplication as shown so that the conductivity of the region suddenly increases.

Therefore the current suddenly increases maintaining a constant potential to the junction. 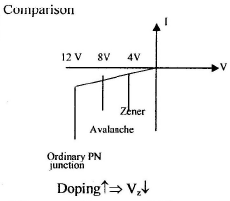 8. The VI characteristic is similar to that of a diode with Zener breakdown. 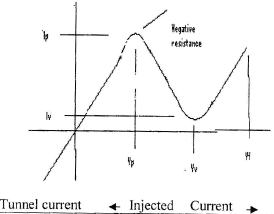 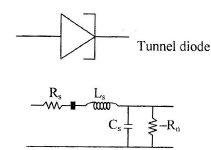 1. Tunnel diode can act as a very fast and high-speed switch. This is because tunneling takes place at the speed of light. Switching time as low as 50 ps.

2. It can be an element in a high frequency (microwave oscillator).

4. It can be used in pulse and digital circuits (memory storage).

Photo-Diode: It is a reverse bias semiconductor diode in which the electron-hole pair is produced in or near the depletion region. As a result of the high electric field in the depletion region, the carrier generated by incident light separate quickly into the majority of regions before they recombine. Thus, most of the electrons generated pairs contribute to the photocurrent dark current as low as reverse saturation current.

Avalanche Photo-diode: These are operated at high Reverse-Bias voltage such that avalanche multiplication takes place.These internal gain as 104 and response time 0.1 ns.

Photo Devices: The amount of absorption of light depends upon the frequency of the incident light and the intrinsic semiconductor material.The energy carried by photon, E = hf Band energy = EG When hf >> EG. Then sharp rise in absorption takes place.

When the photon energyE = hf becomes larger than EG, Electron hole pairs are created by absorbing light, and heroics conduction of current is possible.

Condition for regulations is

It has poor ripple suppression and poor regulation with respect to variation in the input voltage variation.

At Constant temperature DT=0, regulation should be low for good regulation.

Clipping circuits are used to select for transmission that part of an arbitrary waveform which lies above or below some particular reference voltage level. These typical clipping with input-output waveform are shown. 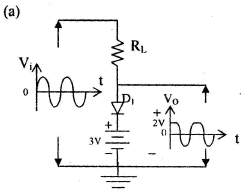 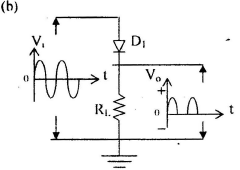 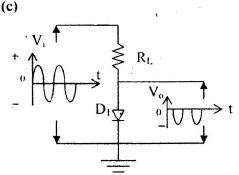 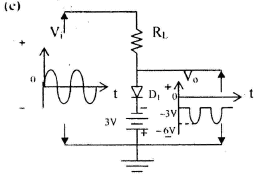 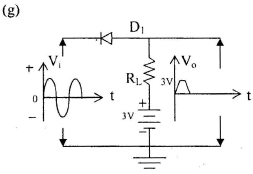 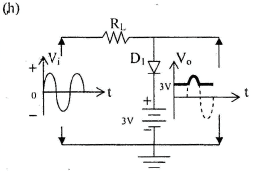 Consider the given circuit which consist of signal source Vi of neglecting output impedance a capacitor and a diode D. 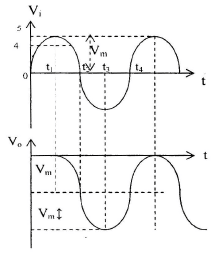 Assuming the ideal diode i.e. Vy = 0 and Rf = 0.The input is sinusoidal. During the first quarter cycle of the input signal, the capacitor gets charged as the diode is forward biased, with no output voltage.o V=0At the end of the first quarter cycle Vc = Vm. After the diode comes reverse bias. The input signal reduces but the capacitor is not able to discharge due to diode Vo = Vi =Vm. During succeeding cycles, the positive extreme of the signal just barely reaches zero. The diode need never again conduct and the positive extremity of the signal has been clamped or restore to zero.If the amplitude of the input signal increases, the diode will conduct for the first quarter cycle. The capacitor will again get charged and the positive extremity will get clamped to zero voltage.However, If the amplitude of the input signal decreases. The signal does not remain clamped to zero. The reason being that capacitor does not get a path to discharge.

The circuit with shunting diode is given below

Now the capacitor gets a discharge path. when the input suddenly rate.Vo = Vi =Vmi

Even if the input does not decrease to 3V the capacitor continues to discharge and diode get forward bias during the peak of input voltage and capacitor charge during peaks. The RC time constant is very important. It must be very large in comparison to the period of the signal. if capacitor loses too much charge when diode is not conducting, then it may be that it does not charge during the small-time internal when the diode conducts.Clamping circuit taking source and diode resistance into account.The realistic clamping circuit is given below: Here source resistance Rs and diode forward resistance takes into account.