Definition of Fluids:- A fluid is a substance which flow continuously under the action of shear force (however small the force may be), as long as shear force is there the fluid moves or deforms.E.g: - Liquids, gases, vapour etc.For a static fluid shear force = 0 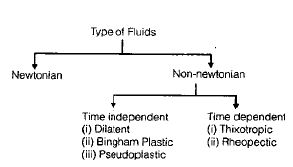 Where A and B are constants depending upon type of fluid and condition of flow.(i) For Dilatant Fluids: n > 1 & B = 0Ex. Butter, Quick sand(ii) For Bingham Plastic Fluids: n = 1 & B ¹ 0 Ex. Sewage sludge, Drilling mud These fluids always have certain minimum shear stress before they yield.(iii) For Pseudoplastic Fluids: n < 1 & B = 0 Ex. Paper pulp, Rubber solution, Lipsticks, Paints, Blood, Polymetric solution etc.(iv) For Thixotropic Fluids : n < 1 & B ¹ 0 Viscosity increase with time.Ex. Printers ink and Enamels.(v) For Rheopectic Fluids: n > 1 & B ¹ 0 Viscosity decreases with timeEx. Gypsum solution in water & Bentonite solution. 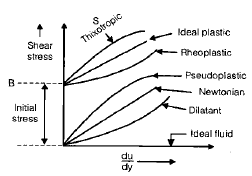 For capillary action dia of tube should be less than 3cm.

C = velocity of sound in fluidK = Bulk modulus of fluid