It is a science of energy transfer and its effect on the properties of a system. 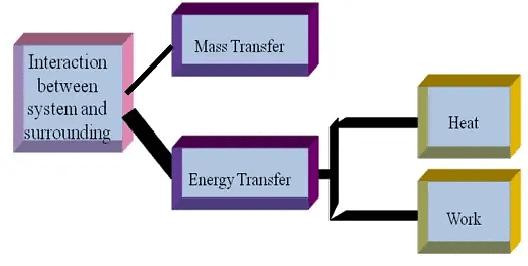 A system is a region containing energy and/or matter that is separated from its surroundings by arbitrarily imposed walls or boundaries. In a thermodynamic analysis, the system is the subject of the investigation.

Everything external to the system is the surroundings.

A boundary is a closed surface surrounding a system through which energy and mass may enter or leave the system.

An isolated system is a thermodynamic system that cannot exchange either energy or matter outside the boundaries of the system. There are two ways in which this may occur:

An intensive property is a property of matter that depends only on the type of matter in a sample and not on the amount.

A system will be in a state of thermodynamic equilibrium if the condition for the following three types of equilibrium is satisfied.

The net force on a system should be 0, i.e. all the forces should be balanced.(ii) Chemical equilibrium

All the chemical reactions occurring inside a system should cease after reaching an equilibrium state.(iii) Thermal equilibrium

There should be no heat transfer between the system and surroundings.