3. Superposition theorem: This theorem states that if a no. of voltage sources or current sources are acting together in an bilateral network then resultant current voltage in any branch is algebraic sum of current / voltage due to individual sources by replacing them with their internal impedance.

Example: For the given circuit, the current I is

Due to voltage source

Note: (a) The initial conditions are assumed to be zero in reciprocity theorem.(b) There should not be any extra dependent or independent sources in network.

5. Maximum Power Transfer Theorem: The following maximum power transfer theorems determine the values of the load impedance which results in maximum power transfer across the terminals of an active network. We consider a series combination of source and fixed complex impedance delivering power to a load consisting of a variable resistance or a variable  complex impedance.Case 1: Load is variable resistance RL:

Power delivered to RL is:

To determine the value of R for maximum power transferred to the load,

We arrive at the condition:

6. Compensation Theorem: The compensation theorem is useful in determining the current and voltage changes in a circuit element when the value of its impedance is changed.This application occurs in bridge and potentiometer circuits where a slight change in one impedance results in shift from the null condition.Statement: In a linear time invariant bilateral network if the resistance R of a branch is changed by  ΔR then the currents in all branch of the network will change and this change in current can be found by connecting a voltage source VC such that VC = i ΔR  in series with resistance (R +ΔR ).Here the current i represent current through R before change and all sources are replaced by their internal impedance to find out the change in current.

7. Tellegen's theorem: This theorem states that the algebraic sum of power consumed and delivered by each branch of a network is always zero.

n= no. of branches of network , vK =voltage across Kth branch.

8. Millman's theorem: The Millman’s Theorem states that – when a number of voltage sources (V1, V2, V3……… Vn) are in parallel having internal resistance (R1, R2, R3………….Rn) respectively, the arrangement can replace by a single equivalent voltage source V in series with an equivalent series resistance R.  In other words; it determines the voltage across the parallel branches of the circuit, which have more than one voltage sources, i.e.,  reduces the complexity of the electrical circuit.

This Theorem is given by Jacob Millman. The utility of Millman’s Theorem is that the number of parallel voltage sources can be reduced to one equivalent source. It is applicable only to solve the parallel branch with one resistance connected to one voltage source or current source. It is also used in solving network having an unbalanced bridge circuit.

As per Millman’s Theorem

Statement: A known voltage in a branch can be replaced by an ideal voltage source.

Explanation of Substitution TheoremLet us take a circuit as shown in fig – a, 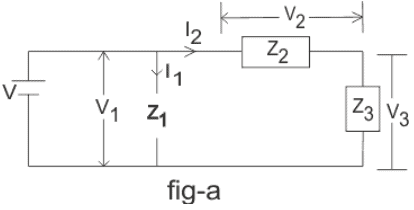