Basic Concepts of speed Control of DC and AC Motors

Speed control of DC Motors Terminal voltage of a DC motor is given by : V = Eb + Ia Ra

P = Number of polesø = Maximum flux per pole (Wb)Z = Total number of armature conductorsN = Speed of the armature in r.p.s.

Speed is directly proportional to supply voltage V. Hence, thyristors are used in various combinations tor speed control by adjustment of supply voltage to armature or the field winding as the angle of conduction is controlled.

Three basic methods are used to obtain variable AC. voltage from a fixed supply voltage (AC. or DC) by

(a) Phase control: When supply is AC the current is controlled to flow from the supply to the motor for a fraction of each positive half cycle; this is repeated cyclically. This type of control can be applied for all motor ratings,

(b) Integral cycle control: From AC supply the current is made to flow for a number of complete cycles and quenched for a further number of cycles and the sequence of operation is repeated. ‘On’ ‘Off duration ratio is adjusted by control. This method is useful for small motors fractional kW size,

(c) Chopper control: A DC voltage can be switched on and off rapidly and repeatedly by means of a thyristor to a DC motor. The average DC voltage is controlled by varying on/off time ratio. This type ot control is used for traction motors.

Phase Control All the uncontrolled rectifiers give an output DC voltage which has a constant average value. If some of all or the diodes are replaced by thyristors, output voltage is adjusted by phase control. Thyristor controlled converter basic circuits with wavefor.m.s. are explained below.

1. Single phase half wave converter: Here power is only half the available and hence the method is used for fractional horse power motors.

The angle of conduction is controlled by the gate pulse. A free wheeling diode D2 is connected across the motor to conduct during the negative half-cycle to nullify the armature active inductive current stored during positive half cycle. 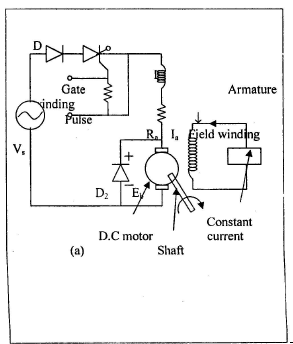 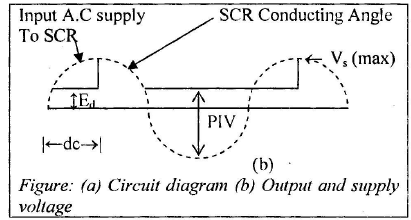 The average DC voltage is

2. Single Phase full wave converter : This method is used for motor from 1 kW to 20 kW ans inversion does not take place

Discontinuous current is given by

3. Three phase half wave converter : Three phase controlled converters are used for control of motors from a few kW to hundreds of kW. A 3-phase half-wave control circuit is shown in figure Thyrisotor firing angle is between [π/6] and [5π/ 6].

The average output voltage is

Intergal Cycle Control The supply is switched on for an integral number of cycles C1 and is made off for further number of integral C2. Thus one on/off cycle is for time C= C1 + C2. This on/off cycle is repreated cyclically. The switching is effected by mean of thyristor as shown in figure. Free wheeling is provided by rectifier bridge diodes.

The speed control is ibtained by varying C1/C2. smooth operation is achieved when c is between 10 and 20 and C1/C2 is less than unity. Intergral cycle control, triggering of thyristor occurs at zero voltage.

A thyristor chopper can be used to obtain variable output voltage from a constant DC supply source, e.g. battery or DC railway traction supply. The voltage control is obtained by chopping and this is an economical method of controlling speed and torque of a DC motor with battery supply or traction motors.

The circuit voltage and current wave for.m.s. are shown in figure.