which shows that for laminar flow through circular pipe, velocity of flow varies parabolically and thesurface of velocity distribution is a paraboloid of revolution. 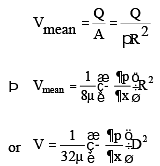 so mean velocity of flow occurs at a radial distance of 0.707 R from the centre of the pipe. 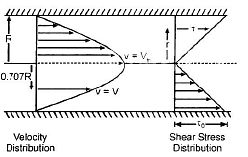 Laminar Flow Between Parallel PlatesCase 1 : Both plates are at Rest

distribution is given by 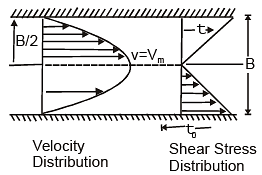 Case 2 : When one Plate Moving And Other at Rest is known as COUETTE Flow

Expression For Head Loss(a) In case of laminar flow through pipes :

(b) In case of laminar flow through parallel plates :

(d) The general equation is

where,hf = loss of head in length LV = mean velocity of flowD = characteristic dimension representing the geometry of passage.k = constant, whose value depends upon the shape of passage.