MODES  OF  FAILURE  OF  A COLUMNElastic instability A column subjected to axial load, may fail under the following modes: (i) Crushing (ii) Buckling (iii) Mixed mode of Buckling and Crushing.

Euler's Theory (Buckling failure)  Assumption of Euler's theory: (i) Axis of the column is perfectly straight  when unloaded. (ii) The line of thrust coincides exactly with the unstrained of the column. (iii) Flexural rigidity EI is uniform (iv) Material is isotropic and homogeneous. (v) The buckling value of load is assumed to obtain for all degrees of flexure. (vi) Length is assumed to be too large with respect to cross section.

Limitation of Euler's Formula: (i) The critical load that causes buckling depends not on strength of the material, but only on its dimensions and modulus of elasticity. This converts the strut problem from the problem of instability to a problem of stress, of which Euler's theory takes no account. (ii) In order for Euler's formula to be applicable, the critical stress p1 must not exceed the proportional limit.

Case 2 : One end fixed and other end free 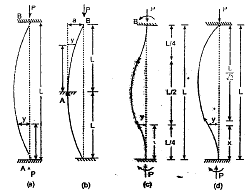 PRACTICAL END CONSITION  AND EFFECTIVE LENGTH FACTORS:As per IS : 800 - 1984, following table can be used for finding effective length: Effective length of compression members Radius of Gyration and Slenderness Ratio: 

where, I = Moment of Inertia A = area of section 

Where, Pc = fc.A= ultimate load for a strut

= Euler  crippling load for the standard case After rearranging above relations,

= Rankine's constant for a particular material