All the losses are finally converted into heat and causes an increase in temperature.Note: Some energy is stored in the rotating masses (mechanical system)Associated the losses with the appropriate system, eq (1) can be re-written as

where ψ is the instantaneous flux linkages with the circuit.∴ 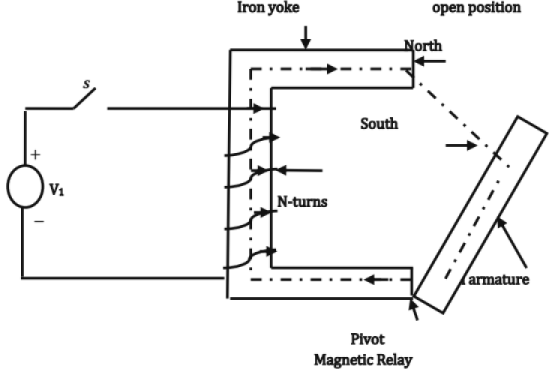 Mechanical Work Done: Let us once again consider the magnetic relay.When the Movable End of the Armature Is Held in the Open Position

When the Movable End of the Armature Is In The Closed Position (l.E. It IS IN Constant With the Yoke)

During the Movement of the Armature: When the armature is in the open position, the exciting current sets up a magnetic field. Flux linkages are ψ1.

Here, we have to use the coil impedance (not the resistance, as the flux linkages are changing)The magnitude of the counter e.m.f depends on how FAST the armature is moving from open position to closed position.Before considering the actual movement of the armature which can neither to be considered to be too slow or too fast (instantaneous), let us consider two extreme cases; viz,(i) Very slow movement(ii) Very fast movement

Slow Movement: When the armature is in the open position, exciting current= i1, flux linkages = ψ1 operating point is A. II. Instantaneous Movement of the ArmatureWhen the armature in open position, the operating point is A corresponding to an exciting current of U and flux linkages ψ1. Comparsion of Servomotors with Conventional Motors

There are three most popular types of rotor arrangements:

Higher the resolution, greater is the accuracy of positioning of objects by the motor.

Hybrid Stepper MotorThe main advantage of the hybrid stepper motor is that if the motor excitation is removed, the rotor continues to remain locked into the same position as before removal of excitation. This is due to the fact that the rotor is prevented to move in either direction by the detent torque produced by the permanent magnet.