R1 and R2 = outside and inside radii of collarR = mean radius of collarµ1 = coefficient of friction for the collar.Total torque, T = T1 + T2 

Effort applied at the circumference of the screw to lift the load isP = W tan (f + a)It there would have been no friction between the screw and the nut the f will be equal to zero. The value of effort Po necessary to raise the load, will then given byPo = W tan a

Maximum efficiency of a square threaded screw occurs at 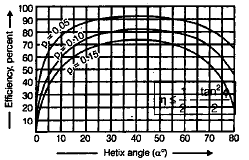 In other words, the load will start moving downward without the application of any torque. Such a condition is known as over hauling of screws. If however, f > a, the torque required to lower the load will be positive, indicating that and effort is applied to lower the load. Such a screw is known as self locking screw.The efficiency of self locking screws,

-Shear stress for the screw

-Shear stress for the nut

w = axial load on the screwn = Number of threads in engagementdc = core or root diameter of the screwdo = outside or major diameter of nut or screwt = thickness or width of thread, (= p/2) 