The uninterruptible Power Supply (UPS) systems have been to provide the emergency power to such critical loads in the case of power interruption due to any reason such as load shedding or fault in power system. UPS is also used for the systems which need a good quality supply.

UPS systems are widely used in industry. Their main use is to increase the reliability and quality of the power supplied to sensitive loads. A UPS for.m.s. a buffer between the mains supply and sensitive loads.

UPS systems basically of two types. The types of UPS used depends on the application. The systems which can tolerate a little bit interruption in supply and which are not much sensitive to variations in voltages and current surges, etc. In the off-line scheme, shown

in figure the load is supplied by mains all the time except interruption period. Mains also charges battery through rectifier. During interruption, battery supplies the power to the load through inverter. The on-line scheme is shown in figure. This scheme is used in the application where interruption cannot be tolerated and load are also very much sensitive to disturbances in supply. In this scheme the power is always supplied through inverter. During interruption period the battery supplies power otherwise mains supplies power but through rectifier and inverter. 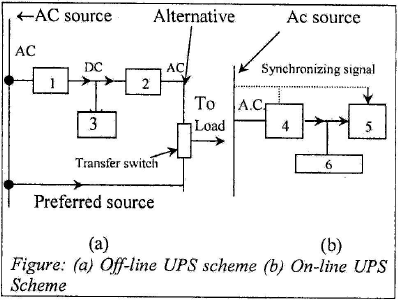 A convention UPS is shown in figure. It consists of following components:

Inverters used in UPS are of basically two type: Bridge and Push-pull type. In this inverters normally thyristors, GTO’s, power transistors and MOSFETs are used. But due to high operating frequency MOSFETs are preferred to other ones.

A typical scheme of rectifier charger is shown in figure.

There are two types of inverters based on supply source Voltage source inverter and current source inverter. As far as reliability is concerned VSI are very much sensitive. UPS fed from current source don’t have these problems however, they require an extra power conversion stage to create current source. A good voltage regulation can also be achieved because of the loading effect of the output filter.

The size of passive filters can be reduce by increasing the switching frequency.

Static bypass switching: This is basically transfer switch which connects either UPS or mains to load. The bypass switches used in UPS which supplies computer like load, where continuity of supply is very important factor requiring a great attention in the design because these should have very high operating speed.

To improve the speed, transfer logic is used in bypass switches. This logic compares the signal available from UPS or mains with references and accordingly switches power path from one system to another. The reference used can be fixed DC level, stepped wave or chopped sine wave.

Switched Mode Power Supply (SMPS) With advances in electronics, need for DC power supplies for use in integrated circuits (ICs) and digital circuits has increased manifold. For such electronic circuits, NASA was the first to develop a light-weither and compact switched mode power supply in the 1060s, for use in its space vehicles. Subsequently, this power supply become popular and presently, annual product of SMPSs may be as high as 70 to 80% of the total number power supplies produced.At this juncture, a questions may arise that controlled dc supply can also be obtained from phasecontrolled rectifiers. Then why go in the SMPS ? An ac to dc rectifier operates at supply frequency of 50 (or 60 Hz) . Ion order to obtain almost negligible ripple in the DC output voltage, physical, bulky and weighty.On the other hand, SMPS works like a dc chopper.By operating the on/off switch very rapidly. AC ripple frequency rises which can be easily filtered by L and C filter circuits which are small in size and less weighty.It may therefore be inferred that it is the requirement of small physical size and weight that has led to the wide spread use of SMPSs.As stated above, SMPSs is based on the chopper principal. The output DC voltage is controlled by varying the duty cycle of chopper by PWM or FM techniques. The circuit configurations used for SMPS can be classified into four broad categories; namely fly back, push full, half bridge and full- bridge.In SMPS circuits discussed here, PWM technique is used for the inverter. The output of the inverter is then converted to DC by diode rectifier. As the inverter is made to operator at very high frequency, the ripples on the DC output voltage can be filtered out easily by using small filter components. If the switching devices are power transistor, the chopping frequency is limited to 40 kHz. For power MOSFETs, the chopping frequency is of the order of 200 kHz; as a result, size of the filter circuit and transformer decreases leading to considerable savings. At such high frequency, ferrite core is used in transformers.The four categories of SMPSs a listed above are now discussed briefly.

Push-Pull converter SMPS with push -pull configuration is shown in figure below. It uses two power MOSFETs M1 and M2 and a transformer with mid-taps on both primary and secondary sides. As in flyback converter, an uncontrolled rectifier feeds push-pull SMPS. Inductor L and capacitor C are the filter components. 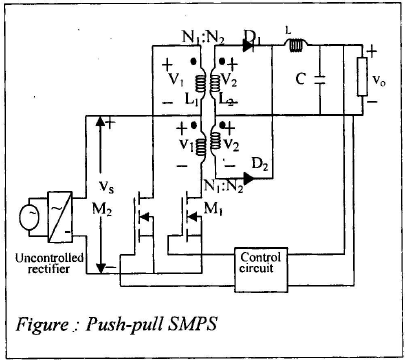 When M1 is turned on, Vs is applied to lower half of transformer primary, i.e. V1 = Vs. As a result, voltage

is induced voltage in both the secondary windings. Voltage V2 in upper half secondary forwrd biases diode D2, therefore load voltage Vo is given by

When M2 is turned on, V1 = – Vs applied to upper half of primary. Consequently

induced in both the transformer secondary. As V2 is negative, diode D2 gets forward biased and Vo = Vs as before.This shows that voltage on primary swings from + Vs with M1 on to -Vs with M2 on. Power MOSFETs M1 and M2 operate with duty cycle of 0.5. When M1 is off, the the voltage across M1 terminals is Voc = 2Vs.As both M1 and M2 are subjected to open -circuit voltage of 2Vs, this configuration is suitable for lowvoltage application only.

Half-bridge Converter The circuit for half-bridge SMPS configuration is shown in figure. It consists of an uncontrolled rectifier, two capacitors C1 and C2, two power MOSFETs M1 and M2 one transformer with mid-tap on the secondary side, two diodes D1 and D2 and filter components L and C. 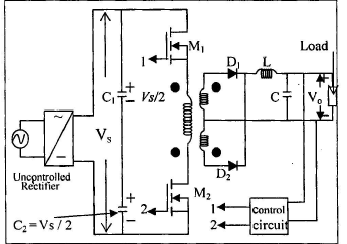 Two capacitance C1 and C2 have equal capacitance, therefore voltage across each of the two is [Vs/2].When M1 is turned on voltage of C1 appear across transformer primary i.e. V1 = [Vs/2] and voltage inducted in secondary is

and diode D1 get forward biased.When M2 is turned on, reverse voltage of V1 = [Vs /2] appears across transformer primary from C2 i.e. V1 = [Vs/2] and voltage induced in secondary is Vs = – 2N1/N2, therefore diode D2 gets forward biased. This means with transformer primary voltage swings from – [Vs /2] to + [Vs /2]. Average output voltage, however is

When M1 is off, open voltage across M1 terminals is Voc = Vs. When M2 is off, as before Voc = Vs. For HVDC application, half-bridge converter is, therefore, preferred over push-pull converters. For L.V. dc application, push-pull SMPS is preferred due to low MOSFET currents.

Full Bridge converter The circuit arrangement  for a full-bridge SMPS is shown in figure. It is consists of an uncontrolled rectifier, four MOSFETs, transfomer with mid- tap secondary, two diodes and LC filter circuit. As in all previous circuit, the function of control circuit is to sense the output load voltage and to decide the duty ratio of MOSFETs. 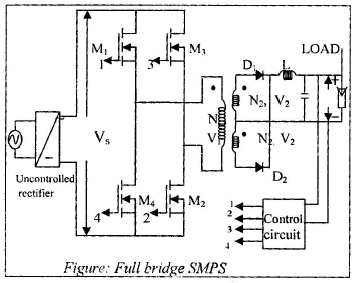 When Power MOSFETs M1 and M2 are turned on together, voltage Vs appears across transformer primary. i.e.V1 = Vs and secondary voltage

Therefore, diode, D2 now begins to conduct and the output voltage is again Vo = αVsThe open circuit voltage across each MOSFET is Voc = Vs of all the four configurations of SMPSs, full-bridge converter operates with minimum voltage and current stress on the power MOSFET. It is there fore very popular for high power application above 750 W.

The main advantage of SMPSs over convertional linear power supplies are as under:

1. For the same power rating, SMPS is of smaller size, lighter in weight and possesses higher efficiency because of its highfrequency operation.2. SMPS is less sensitive to input voltage variations.

The disadvantage of SMPSs are under 1. SMP S has higher output ripple and its regulation is worse2. SMPS is a source of both electromagnetic and radio interference due to high frequency switching3. Control of radio frequency noise requires the use of filters on both input and output of SMPS.