(f) Hydraulic depth (D) : It is the ratio of wetted area A to the top width T.

Difference between TEL/EGL and HGL at any section

where a = Kinetic energy correction factor

If the datum coincides with the channel bed at the section, the resulting expression is known as SPECIFIC ENERGY and is denoted by E. Thus. 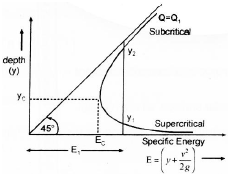 Equation (i) & (ii) are basic equations for critical flow conditions in a channel.

where, n = a roughness coefficient known as Manning’s ‘n’.

(By comparing chezy and Manning’s formula)

(ii) The trapezoidal channel should be part of regular hexagon.

(iii) The side slopes should be 60° with the horizontal.

(i) The pressure distribution at any section is assumed to be hydrostatic.

(ii) The resistance to flow at any depth is given by the corresponding uniform flow equation, such as Manning’s formula with the condition that the slope term to be used in the equation is energy slope and not the bed slope. From specific force curve we can find the sequent depths y1 and y2 for a given discharge in a given horizontal channel.Condition for Critical Flow :

Hydraulic Jump in a rectangular channel :