The document Shallow Foundation and Bearing Capacity Civil Engineering (CE) Notes | EduRev is a part of the SSC Course Foundation Engineering.
All you need of SSC at this link: SSC

where, Df  is Depth of footing B is Width of footingTypes of Footing:(A) Strip Footing or Continuous footing (L>>B):-Provided for load bearing wall.-Provided for a row of columns which are closely spaced that their footings overlap each other. 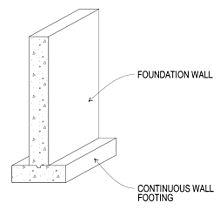 (B) Combined Footing: -Provided to support more than one column. (D) Raft Foundation:-This is also called mat foundation.-A  mat  foundation  consists  of  a  single  heavily  reinforced  concrete  slab  that  underlies  the  entire  structure  or  a  major  portion  of  the  structure.-Mat  foundations  distribute  the  loads  over  a  large  area,  thus  reducing  the  intensity  of  contact  pressures.-Structures   founded   on   relatively   weak   soils   may   be   supported   economically   on   mat   foundations 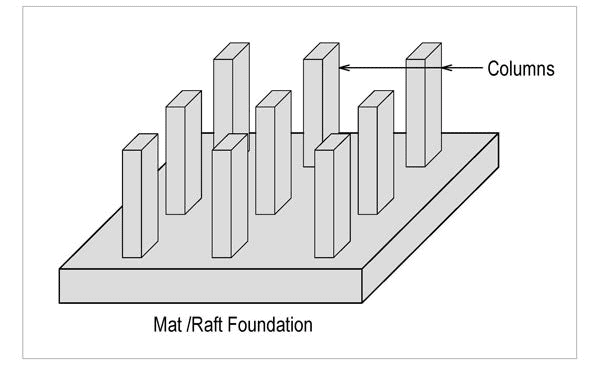 BEARING CAPACITY:It is the load carrying capacity of the soil.Basic definitions:-Ultimate bearing capacity or Gross bearing capacity (qu):  It  is  the  least gross  pressure which will cause shear failure of the supporting soil immediately below the footing.-Net ultimate bearing capacity (qnu): It is the net pressure that can be applied to the footing by external loads  that  will  just  initiate  failure  in  the  underlying  soil.  It  is  equal  to  ultimate  bearing  capacity  minus  the stress  due  to  the  weight  of  the  footing  and  any  soil  or  surcharge  directly  above  it.  Assuming  the  density  ofthe footing (concrete) and soil (γ) are close enough to be considered equal, thenqnu = qu - γDfwhere,Df is the depth of the footing.-Safe bearing capacity: It is the bearing capacity after applying the factor of safety (FS). These are of two types:-Safe  net  bearing  capacity  (qns)  :  It  is  the  net  soil  pressure  which  can  be  safety  applied  to  the  soil considering only shear failure. It is given by,

-Safe gross bearing capacity (qs): It is the maximum gross pressure which the soil can carry safely without shear failure. It is given by,qs = qns + γDf

METHOD TO DETERMINE BEARING CAPACITY(i) Rankines Method : Rankine (1885) attempted to determine ultimate bearing capacity of the soil by considering the equilibrium of two elements of the soil, one below the footing and another outside the footing adjacent to the first element.Following is the equation for ultimate bearing capacity as per Rankine’s theory for cohesionless soil:

where Ka is the Rankine’s coefficient of active earth pressure and q the maximum pressure applied at the base of the foundation.

(ii) Terzaghi's Method:Terzaghi’s bearing capacity theory is useful to determine the bearing capacity of soils under a strip footing. This theory is only applicable to shallow foundations. He considered some assumptions which are as follows :-The base of the strip footing is rough.-The depth of footing is less than or equal to its breadth i.e., shallow footing.-He neglected the shear strength of soil above the base of footing and replaced it with    uniform surcharge.(γDf)-The load acting on the footing is uniformly distributed and is acting in vertical direction.-He assumed that the length of the footing is infinite.-He considered Mohr-coulomb equation as a governing factor for the shear strength of soil.

Terzaghi has proposed certain shape factors to take care of the effect of the shape on the bearing capacity. The equation can be written as,

(iii) Skemptons method (C-soil) Skempton  (1951)  has  showed  that  the  bearing capacity  factors Nc in  Terzaghi's equation  tends  to  increase with depth for a cohesive soil.For (Df/B)≤2.5,(where Df is the depth of footing and B is the base width)(Nc) for rectangular footing

(Nc) for circular and square footing = 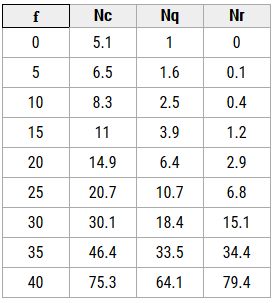 when b=0,Rw2 = 0.5-When water table further rises above base of foundation, correction factor Rw1  comes in to action, which is given by the following equation. 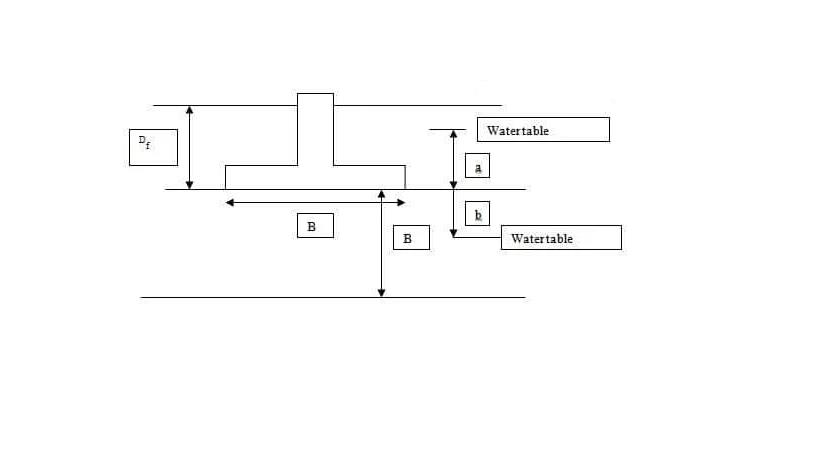 The factor of safety ranges from 2 to 3.-Foundation Settlement Calculation on Clayey SoilsSettlement of foundation (sf) = sp x Bf/Bp If the number of blows for 150mm drive exceeds 50, it is taken as refusal and the test is discontinued. The standard penetration number is corrected for dilatancy correction and overburden correction.