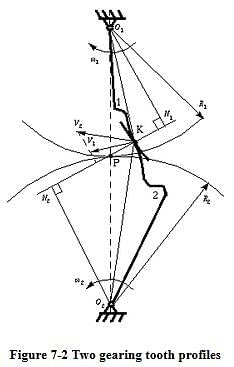 Although the two profiles have different velocities V1 and V2 at point K, their velocities along N1N2 are equal in both magnitude and direction.  Otherwise the two tooth profiles would separate from each other. Therefore, we have

We notice that the intersection of the tangency N1N2 and the line of center O1O2 is point P, and

Thus, the relationship between the angular velocities of the driving gear to the driven gear, or velocity ratio, of a pair of mating teeth is

Point P is very important to the velocity ratio, and it is called the pitch point. Pitch point divides the line between the line of centers and its position decides the velocity ratio of the two teeth. The above expression is the fundamental law of gear-tooth action. 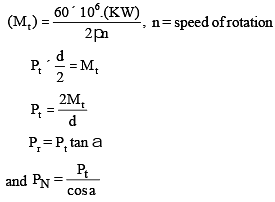 The first equation used for bending stress was the Lewis equation. This is derived by treating the tooth as a simple cantilever and with tooth contact occuring at the tip as shown below: 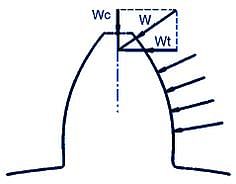 Only the tangent component(Wt) is considered. It is also assumed that only one pair of teeth is in contact. Stress concentrations at the tooth root fillet are ignored. It can be shown that the maximum bending stress occurs at the tangent points on the parabola shown above. Use of the standard equation for bending stress(σ=Mc/I) leads to: 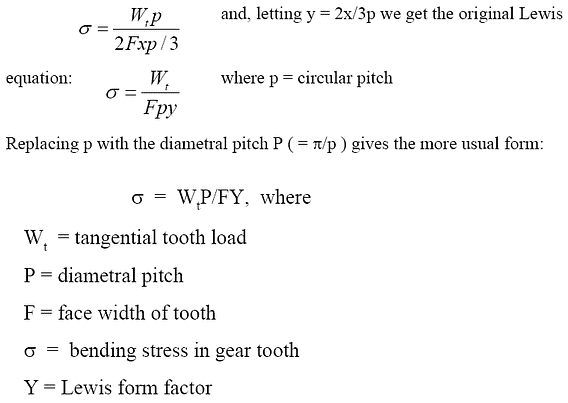 The value of Y independent of the size of tooth and depend only on No. of teeth on gear and system of teeth.Maximum tangential force Pt called beam strength and replaced by Sb.

Since torque developed by source and required by driven machine varies during working cycle. It is balanced by flywheel. In gear design maximum force is the criterion. This is accounted by means of a service factor. 

Due to inability in calculation of dynamic load a velocity factor (Cv) developed,

where, Pd is the dynamic load