ASSHTO OR HRB:-Classification of soil is based on both particle size composition and plasticity charateristics.
-According to this system soil are classified into b groups. A-1 to A-7 with an additionl group A-8 for peat or muck.
-This method utilise group index value.

Soils are divided into three broad divisions:
-Coarse grained soils, when 50% or more of the total material by weight is retained on 75 micro IS sieve.
-For fine grained soils, when more than 50% of the total material passes through 75 micron IS sieve.
-If the soil is highly organic and contains a large percentage of organic matter and particles of decomposed vegetation, it is kept in a separate category marked as peat (Pt).

In all there are 18 groups of soils: 8 groups of coarse grained, 9 groups of fine grained and one of peat.

Prefix and Suffix of ISSCS 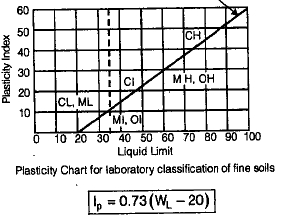 Division of soil fractions on the basis of Grain Sizes: