A cross drainage work is a structure which is constructed at the crossing of a canal and a natural drain, so as dispose of drainage water without interrupting the continuous canal supplies.

Type of Cross-drainage works The drainage water intercepting the canal can be disposed of in either of the following ways:

(1) By passing the canal over the drainage. this may be accomplished either through (i) an aqueduct,; or through a (ii) syphon- aqueduct.

(2) By passing the canal below the drainage. This may be accomplished either through (i) a super -passage; or through a (ii) canal syphon generally called a syphon.

(3) By passing the drain through the canal, so that the canal water and drainage water are allowed to intermingle with each other, This may be accomplished through (i) a level crossing; or through (ii) inlets and outlets.All these different types of cross drainage works are described below in details. 2. SUPER PASSAGEWhen the FSL of the canal is sufficiently below the bottom of the drain trough, so that the canal water flows freely under gravity, the  structure is known as a super passage. However, in this type of cross-drainage works, the inspection road cannot be provided along the canal and a separate bridge is required for the roadway. For affecting economy, the canal may be flumed, but  the drainage trough is never flumed. 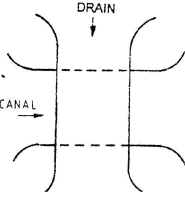 Inlets and outlets:- An inlet is a structure constructed in order to allow the drainage water to enter the canal and get mixed with the canal water and thus to help in augmenting canal supplies. may sometimes be constructed to escape out the additional discharge at a suitable site, a little downstream along the canal. 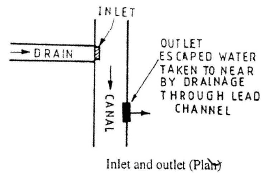