Principal Stress - Strain and Theories of FailureANALYSIS OF PRINCIPAL STRESSES

Case-1 : If principal stresses acting on two mutually perpendicular planes are σ1 and σ2 then, normal and shear stresses on a plane n – n which is inclined at an angle θ with the plane of σ1 are given by 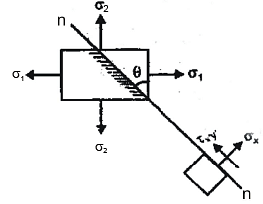 Case-2 : If σx and σy are normal stresses and txy is shear stress acting on the mutually perpendicular planes then the normal and shear stresses on any plane n-n inclined at an angle θ with the plane of σx are given by 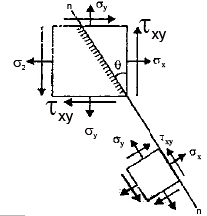 The magnitude of principal stresses σ1 and σ2 are given by

Special case-2 : The plane of maximum shear stress lies at 45° to the plane of principal stress and magnitude of ζmax is given by

Therefore resultant stress on the plane of Тmax is 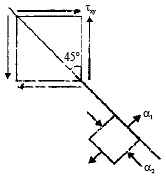 The radius of Mohr’s circle is equal to maximum shear stress.Radius,

COMBINED BENDING & TORSIONLet a shaft of diameter ‘d’ be subjected to bending moment ‘M’ and a twisting moment ‘T’ at a section. At any point in the section at radius ‘r’ and at a distance y from the neutral axis, the bending stress is given by

and shear stress is given by

Where I = Moment of inertia about its NA and Ip = Polar moment of Inertia.

Special case : If φx'y' = 0 then magnitude of principal strains and their plane are given by 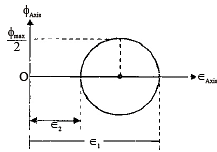 The radius of Mohr’s circle is half of maximum shear strain i.e.

Note : Aluminium alloys & certain steels are not governed by the Guest theory.

It is fairly good for ductile materials. 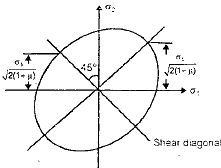 The properties are similar in tension and compression 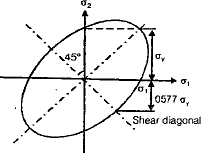