To study the practical transformer, the effect of assumptions, made for the ideal transformer, will be taken up one by one under the following cases.Case-1: All Features of ideal Transformer Expect:μ ≠ ∞On No-load Condition:As there is no core loss, hence magnetizing current, and no-load current will equal, and flux ϕ will be in phase with the no-load current because the flux is generated by the load current. 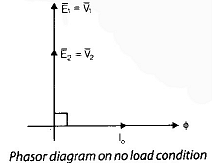 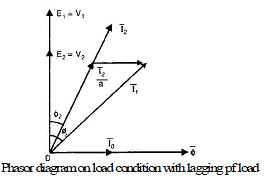 Case-2:μ ≠ 0 and Core Loss Exists:• The core losses are always present in the ferromagnetic core of the transformer since the transformer is an ac-operated magnetic device.• The hysteresis loss in the core can be minimized by using high-grade material such as CRGO steel and eddy current loss can be minimized by using thin laminations for the core. 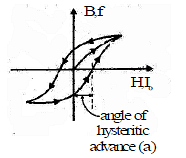 • Because of hysteresis the no-load current of exciting current I0 leads the magnetic flux ø by an angle α called the angle of hysteretic advance.Iø = I0 sin ø0 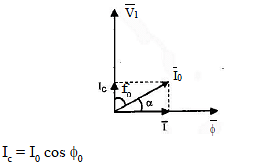 • The component lø along ø is called the reactive or magnetizing current and the second component lc along V1 is called core loss component or power component. 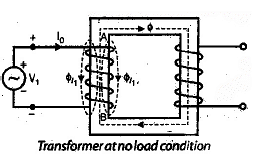 • The inductor is the suitable element for showing the leakage flux element.• Ø l1 and Øl2 are in phase with l1 and l2 respectively because these flux are created by load current. 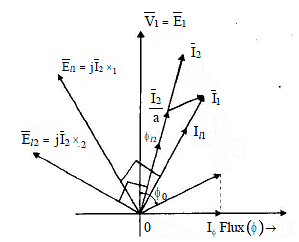 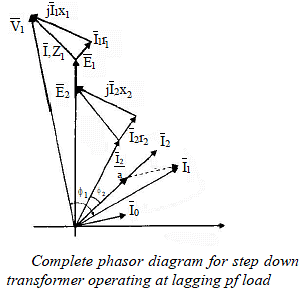 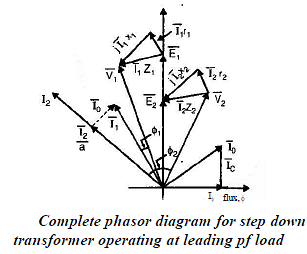 The equivalent circuit is a circuit representation of the equation describing the performance of the device. 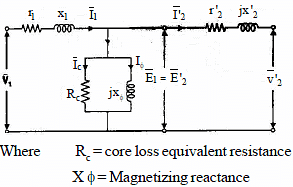 • All the prime quantities are referred to the primary side.Equivalent Circuit Referred to Secondary Side:

The following tests are performed to find the performance parameters of transformers.Polarity Test• In determining the relative polarity of the two windings of a transformer the two windings are connected in series across a voltmeter while one of the winding is excited from a suitable voltage source as shown in the figure.

• A voltmeter, wattmeter, and ammeter are connected to the low voltage side of the transformer. Readings are recorded when e applied rated frequency voltage to the L.V. side and kept high voltage side open-circuited.• The ammeter records the no-load current or exciting current l0. Since l0 is quite small (2 to 6%) of rated current, so primary leakage impedance drop is negligible.• The wattmeter recorded input power which consists of core loss and ohmic loss.Remember:The ohmic loss during the open-circuit test is negligible in composition with the normal core loss.Parameters of the shunt branch can be found out by the following sequence of equations.

• The applied voltage is adjusted by autotransformer to circulate rated current in the high voltage side.This circulated rated current achieved by only 2 to 12% of its rated value of primary voltage.• In this test, the wattmeter records the core loss and the ohmic loss in both the windings but the core loss and shut branch parameter ignored because only 2 to 12% of rated voltage is applied. 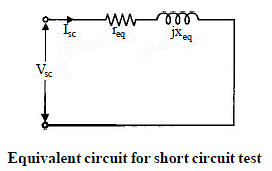 • To find different parameters of transformers in the sequence of equations.

Back to Back or Sumpner's test or Load Test:• While open circuit test and short circuit tests on a transformer yield its equivalent circuit parameters, these cannot be used for the 'heat run' test wherein the purpose is to determine the steady temperature rise if the transformer was fully loaded continuously; this is so because under each of these tests the power loss to which transformer is subjected is either the core-loss or copper-loss but not both.• In order to determine the maximum temperature rise, it is necessary to conduct a full-load test on a transformer or back-to-back test. It is also called the Regenerative test or sumpner's test. The back-to-back test on single-phase transformers requires two identical transformers. 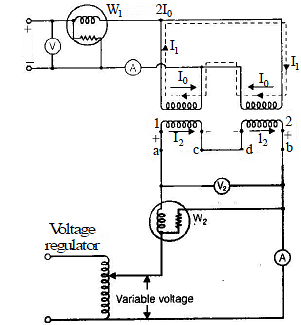 • The primary windings of the two transformers are connected in parallel and supplied at rated voltage and rated frequency.• The secondaries are connected in series with their polarities in phase opposition which can be checked by the voltmeter V2. If the voltmeter Vab across a, b point reads zero, the secondaries are in series opposition and terminal a and be are use for test.• If voltmeter Vab =sum of the two secondaries voltages. It means these are in the same phase. In order to bring them in phase opposition, terminals ad should be joined together to result in zero voltage across terminals bc.• The total voltage across the two secondaries in series will be zero. There will be no current in the secondary windings. The transformers will behave as if their secondary windings are open-circuited Hence, the reading of wattmeter W1 gives the iron losses of both the transformers.• Now a small voltage is injected in the secondary circuit by a regulating transformer excited by the main supply. The magnitude of the injected voltage is adjusted till the ammeter A2 reads full load secondary current, this current produces full load current to flow through the primary windings and will follow a circulatory path through the main bus bar.• The reading of wattmeter W2 will not be affected by this current. This wattmeter W2 given the full load copper losses of the two transformers.