Moving Iron InstrumentsThese instruments are widely used in laboratories and switchboards at commercial frequencies because these are cheaper in cost, robust in construction and can be manufactured with required accuracy.

They are two general types of such in struments i.e. attraction type instruments operate on the principle of attraction of a single piece so soft iron into a magnetic field and repulsion type in struments operate on the principle of repulsion of two adjacent iron pieces magnetised by the same magnetic field. Repulsion type instruments are more sensitive as in these instruments large operating torque is developed by having tow iron elements positioned close together inside the field coil where the magnetizing effect is maximum. Since instantaneous deflecting torque is proportional to the square of the instantaneous current, hence when the instrument is connected in an ac circuit it will indicate the rms value of current or voltage.

The deflecting torque of moving iron instrument is given by equation.

The errors usually occurring in moving iron instruments are

These instruments are simple and robust in construction, cheaper in cost, possess high operating torque, capable of withstanding overload momentarily, capable of giving an accuracy within the limits of both precision and industrial grades and can be used in dc as well as in ac circuits. The drawbacks of moving iron instruments are non-uniform scale, higher power consumption for low voltage range, errors are caused due to hysteresis and stray magnetic field, errors are caused due to change in frequency and waveform in ac measurements and there is a difference between dc and ac calibration because of inductance effect of the instrument and eddy currents on ac.

The moving iron instruments, owing to their inherent advantages, have become most widely used instruments in ac circuits. In addition, they are largely used in dc circuits in cases wher the superior accuracy of moving coil instruments is not an essential requirement.

The basic operating principle of a permanent magnet moving coil instrument is the same as that of D' Arsonval galvanometer except that there is slight difference from the D' Arsonval galvanometer in construction, which makes it portable and convenient in use. The suspension, Employed in galvanometer, is replaced by hardened steel pivots and the controlling torque is provided by spiral or helical springs in absence so suspension. The springs also conduct the operating current into and out of the moving coil. The mirror and optical system usually employed in D' Arsonval galvanometer are replaced by a pointer attached to the moving system and a fixed scale, calibrated for indicating the quantity under measurement directly. The PMMC instrument have the advantages of low power consumption (say μW to 200μW ) because of small driving torque, no hysteresis loss (former being of copper or aluminum), very effective and reliable eddy current damping high torque-weight ratio resulting in high accuracy (2-5% of full-scale reading), no stray magnetic field effect because of use of intensive polarised or unidirectional field, use of single instrument for measurements of currents and voltages by using shunts and multipliers of different resistances.

2. Dynamometer type instrumentsAre very similar to PMMC instruments except that the permanent magnetic field is replaced by a coil (usually two fixed air cored coils are used) which carry the current to be measured (or a definite fraction of it or proportional to the voltage to be measured). The coils are usually air-cored to avoid hysteresis, eddy currents and other error when the instrument is used on ac. The fixed coil is divided into two halves, connected in series with the moving coil and placed together and parallel to each other so as to provide a fairly uniform field within the range of the movement of the moving coil. However, the space between the two halves of the fixed coil must be sufficient enough to allow the passage of the moving coil shaft.

Though these instruments can be used both, for dc and ac measurements but most of its practical uses are in ac as these instruments have higher cost, higher power consumption, lower torque-weight ratio, nonuniform scale and other several draw-backs in comparison to PMMC instruments. 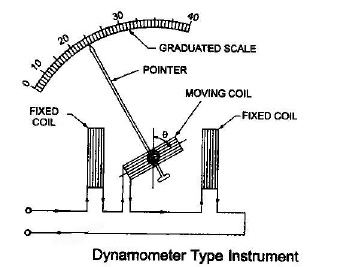 Deflecting torque of a dynamometer instrument is given by equation

where If and Im are current in fixed coil and moving coil respectively.

The errors, that usually occur in dynamometer type instruments, are

These instruments have the drawbacks of 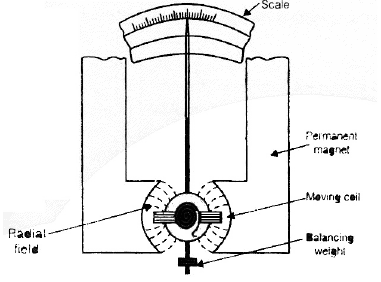 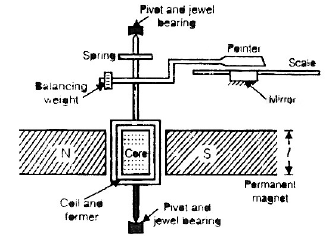 • In this instrument, the strong magnetic field produced is provided by the high permeability iron core (stationary).• Operating field (B) is produced by the permanent magnetic material and it may vary from 0.1 wb/ m2 – 1.0 wb/m2.• It consist of fixed magnet made up of Al NiCO (Al + Ni + CO).• Concentric magnetic construction is used to get longer angular movement of the pointer.• Angular displacement can be over 300º.

• In Voltmeter, PMMC is mouted on meallic frame to provide electromagnetic damping whereas in Ammeter, PMMC is wound on non-magnetic former because the electromagnetic damping is provided by coil of the ammeter shunt.• The moving coil is sustained by control spring which is made up of “Phospher Bronze” Provides:⇒ Controlling torque (Restoring torque).⇒ Lead current in and out of the coil.• Al-former (Moving) is attached to the spindle is responsible for Eddy current damping.

Expression of torque Produced in PMMC:

Force of conductor = F = NBIl sin 90º = NBIℓ since two equal and opposite forces are produced on MC, so a deflecting torque (Td) is developed,

At final or null deflection or at steady deflection,

(where, θF = deflection produced in instrument)

Hence, the scale in PMMC is linerNote:⇒If spring constant is reduced to half the instruments (PMMC) reading will be doubled.⇒ Hence with the ageing effect of spring the reading will be more.

Ammeter Shunt in PMMC:• The basic movement of a d.c. ammeter is a PMMC d'Arsonval galvanometer.• This is used to raised the current range of ammeter.

Properties of Ammeter Shunt:• Ammeter shunt should have low temperature coefficient, small size and low thermal e.m.f. with copper.• The copper shunt are not used because of its bulky size and its high resistivity.• The most commonly used material for D.C. shunt is “Manganin”. Because it has low thermal e.m.f. with copper and low temperature coefficient.• The resistance of shunts should not vary with time.

Note:⇒ “Constantan” is a useful material which is used for the construction of a.c. measuring instrument.

PMMC as Voltmeter:• This has main purpose to increase the voltage range of voltmeter.• A d'arsonval basic PMMC is converted into a voltmeter by connecting a series resistance (Rsv) with and this resistance is called multiplier resistance (Rsv). 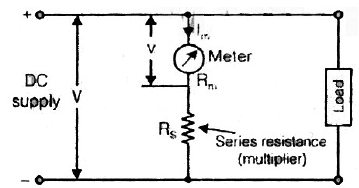 By using voltage division rule we get,

and voltage across the meter movement for current lm, 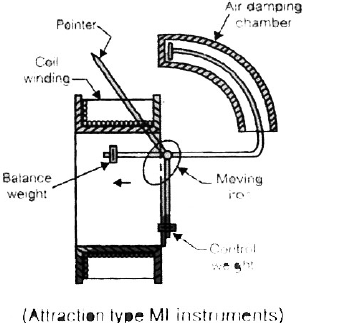 Note:⇒ In both type (Attraction or repulsion) of MI instrument, the iron vanes are magnetised in such a way by the current that there is always a force of attraction in the “Attraction type” and repulsion in the “Repulsion type”. Thus we c an say Moving iron type instrument are unpolarised instruments i. e. They are independent of the direction in which the current flows.

So, these “MI instruments” can be used on both AC and DC purposes.

⇒ The scale is non-linear or non-uniform because θ ∝ I2 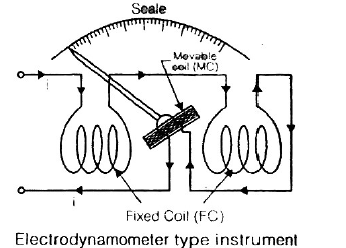 (i) To generate spring control torque.(ii) Provide path for current to the moving coil. 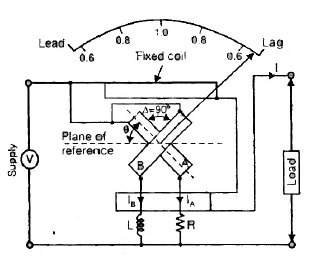 ⇒Let us consider the case of a lagging power factor of cosø .Deflecting torque acting on coil A is,

Direction torque acting on coil B is;

This torque acts in the anti-clockwise direction.Hence at equilibrium,TA = TB

Watthour Meter :• It is not often found in a laboratory but it is widely used for the commercial measurement of electrical energy.• Figure below shows the elements of a single phase watthour meter. 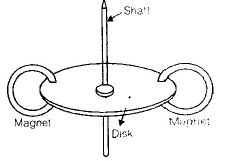 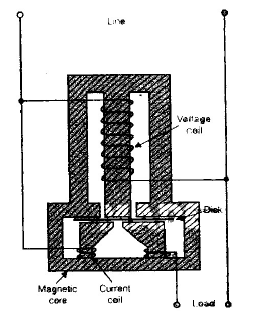 • In the figure above, both coils (current coils and voltage coils) are would on a metal frame of special design, poviding two magnetic circuits.• A light Al-disk is suspended in the air gap of current-coil field, which causes eddly currents to flow in the disk.• The developed torque is proportional to the Fieldstrength of the voltage coils and eddly currents in the disk. The no. of rotations of the disk is therefore proportional to the energy consumed by the load in a curtain time internal, and is measured in terms of kilowatt hours (kWh).• Damping of the disk is provided by the two small permanent magnets located opposite each other at the rim of disk.

Current transformer is employed whenever the current of an ac circuit exceeds the sage current of the measuring instrument (e.g. ammeter or wattmeter or energy meter).

Potential transformer is employed whenever and wherever the voltage of an ac circuit exceeds the voltage of 750 volts as it is not easy to provide adequate insulation on measuring instruments for voltage above 750 volts.

(a) Current Transformers (CTs)The Primary of the CT, which consists of only one of a few turns, is connected in series with the load circuit and so carries the load current to be measured. The secondary winding consists of many more turns than the primary and have the instrument ( an ammeter or ammeter and current coil of wattmeter) directly connected across it. In case of current transformer as the load impedance or 'burden' on the secondary is very small, so the current transformer operates on short-circuit conditions. Also the current in secondary winding is not governed by the load impedance on the secondary but depends upon the current flowing in the primary winding (i.e. main circuit current.) The amount of power which the CT handles is small. The product of voltage and current on the secondary side when the CT is supplying the instrument with its maximum rated value of current, is known as rated burden and is measured in volt-amperes (VA).

(i) ratio error (ii) phase angel error.CT ratio and phase angle errors are given by equations

The ratio error determines the amount of turns compensation to reduce the error to minimum.

(b) Potential Transformers (PTs)The potential transformers are used for measurement of high voltages by means of low range voltmeter or for energising the potential coils of wattmeters and energy meters. These are also used for energising relays and other protective equipment. The voltage being measured acts cross the primary winding, which has a large number of turns and connected across the circuit. the secondary winding which has a much smaller number of turns is coupled magnetically through the magnetic circuit to the primary winding. The turn ratio is so adjusted that secondary voltage is applied to the primary.

The ratio error can be compensated by increasing the turns on secondary winding by the appropriate small amount. 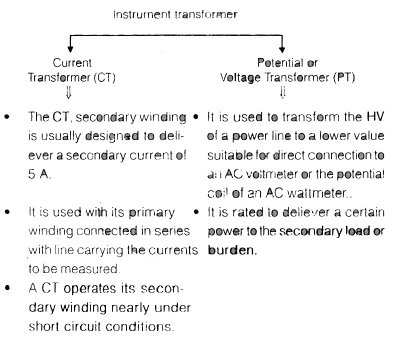