Actually it is not meant that only tool are useful thing that is produced by using metal for human beneficiary. The tool are made up of high quantity of metal such as high carbon steel, high speed steel, carbide, tungsten etc. They have high resistivity, high strength and fatigue.

Turning and BoringTurning is a machining operation for generating external surfaces of revolution while in boring internal surface of revolution are machined.In both these operations, the workpiece or tool is rotated about its axis and is also given a feed in a direction normal to the cutting speed.When the feed motion of tool is axial (parallel to workpiece axis)-Cylindrical surface is generated.

When feed motion is radial (i.e. normal to axis of rotation) an ends face or shoulder is produced. This operation is called facing.If axial and radial feed motions are both present in a constant proportion, a tapered cylindrical surface is generated.

Metal Cutting  Machining is the process of removing unwanted material from workpiece. 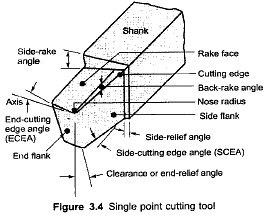 Back Rake Angle ( ab)It is the angle between the line parallel to the tool axis passing through the tip and the rake face and angle is measured in a plane perpendicular to the base.

End Cutting Edge Angle (8-15º) (Ce)It is the angle between the end cutting edge and the line passing through the tip perpendicular to the load axis and the angle is measured in a plane parallel to the base.The normal value of this angle is the range 8º-15º.

The majority of cutting operations involve tool shapes that are three dimensional (oblique).

Difference between Orthogonal and Oblique CuttingOrthogonal Cutting1. Chip flow in a direction perpendicular to the cutting edge.2. Chip get coiled in a spiral fasion.3. Tool life is less4. There are two component of forces (no radial force)5. Surface finish is poor6. It is used in slotting, parting, groouing, pipe cutting7. Chip flow angle is zero

Oblique Cutting1. Chip flow at an angle to cutting edge.2. Chip flow in side ay direction in a widey area thus less concentration of heat.3. Tool life is more.4. There are three component of force.5. Surface finish is good6. It is used in turning, milling, drilling, grinding7. Chip flow angle is more than zero.

Types of Chips1. Continuous ChipsFavorable condition for the continuous chips to form are

Elimination of Built Up Error (BUE) 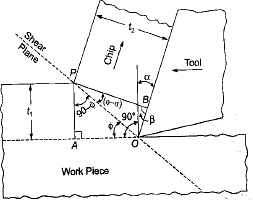 dividing equation (ii) and (i) 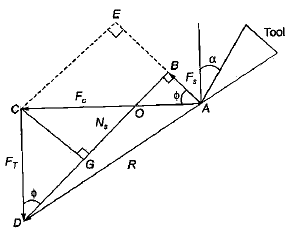 Determination of Area of Shear and Shear StrengthArea of shear plane 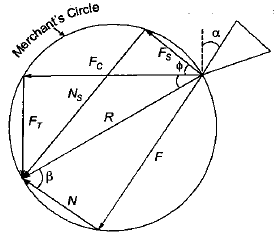 1. Cutting edge is straight and sharp2. Material is homogeneous3. Cutting is orthogonal4. Material is perfectly plastic5. Shear zone extends in a very narrow region which can be approximated by a straight line.

Velocity TriangleLet us assume that the work material is moving against the cutting tool with a velocity V. The chip velocity VC and shear velocity VS.

Type of Tool WearFlank Wear And Crater Wear1. Flank WearFlank wear is more at the corner .• It is due to work hardening.• Main reason for flank wear is abrasion and adhesion.2. Crater Wear• The crater is formed on the surface of the tool by the action of chip particles flowing over it because of very high temperature.• This is generally observed while machining ductile materials, which produces continuous chips. Its main reason is diffusion along with abrasion. 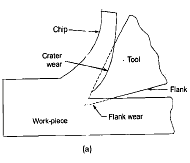 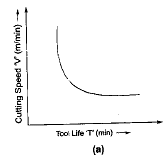 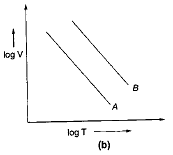 2. Feed and Depth of Cut 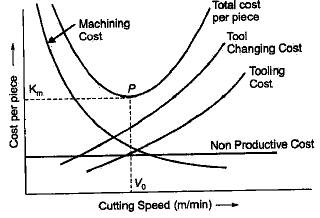 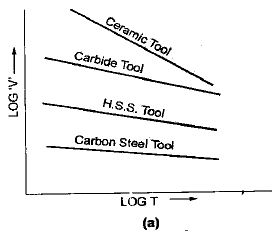 DynamometerIn metal cutting operation the device used for determination of cutting forces is known as Dynamometer.Shaping and PlanningShaping is a machining operation for generating flat surface by means of single point cutting tool. The workpiece is kept stationary and cutting tool is given a reciprocating motion. Feed motions is important to workpiece at the end of each stroke.GrindingIt is used to get desired surface finish, correct size and accurate shape or product. Grinding wheel consist of abrasive particles, bonding material and voids.

Grinding Operations And MachinesThe basic type of grinding operations Surface, Cyclinderical, Internal and Central less grinding-are described in this workpiece. The relative movement of the wheel may be along the surface of the work or it may be radially into the workpiece (Plunge Grinding).

(a) Surface Grinding: Surface grinding involves grinding flat surfaces and is one of the most common grinding operations. Typically the workpiece is secured on a magnetic chuck attached to the work table of the grinder. Nonmagnetic material generally are need by vises, special fixtures, vaccum chucks.

(b) Cylindrical Grinding: The rotating cyclinderical workpiece reciprocates laterally along its axis. Cyclinderical grinders are identified by the maximum diameter and length of the workpiece that can be ground similar to engine lathes. The typical applications include crank shaft bearing spandles, pins, bearing rings and rolls for rolling mills.

Centerless GrindingCenterless Grinding is a high production process for continuously grinding.Cyclindrical surfaces in which the workpiece is supported not by central (hence the term centerless) or chucks but by a blade.Typical parts made by centrerless grinding are roller bearings, piston pins, engine values, camshaft and similar components. This continuous production process require little operator skill.

Finishing OperationsHoningHoning is an operation used primarily to give holes as fine surface finish. The honing tool consists of a set of aluminum oxide or silicon carbide bonded abrasives called stones. They are mounted on a mandrel that rotates in the hole. Honing is also done on external cyclindrical or flat surfaces and to remove sharp edges on cutting tool and inserts.

LappingLapping is a finishing operation used on flat or cyclinderical surfaces. The lap is usually made of cast iron, copper leather or cloth. The abrasive particles are embedded in Lap. Surface finish can be as smooth as 0.025 to 0.1 mm.

PolishingPolishing is a process that produces a smooth surface finish. Two basic mechanism are involved in the polishing process:(i) fine scale abrasive removal(ii) softening and shearing of surface layer by frictional heating during polishing.

Drilling• Drilling is an oblique cutting and it is a process of creating a hole.• Drills are made by forging operation and the material used is HSS steel.• Drills are also tapered along its length so that it doesn't hit the finished part of the hole.• The drills are made slightly smaller in size so that there is some margin for reaming.

Drill Geometry  Following are major actions taking place at the point of a drill.1. A small hole is pierced by the rotating web2. Chips are formed by rotating cutting edges.

Boring• Enlarging already existing hole to bring it to the required size and have a better finish.• The accuracy expected is 0.125 mm.

Reaming and Reamers• It is a process of exacting the hole and finishing it and has a fine surface finish of + 0.005 mm.Reaming is an important operation used to make an existing hole move dimensionally accurate than can be obtain by drilling alone and improves its surface finish. The most accurate holes are produced by following sequences of operation:1. Centering

Trepanning• Drill is in the form of a tube at the periphery of which there are cutting edges. Complete material is not removed.• Initially this process was used in Gun barrel manufacturing process.

Counter Sinking• It is process of making the hole slightly tapered in the beginning. It is seating place for screws.

MILLINGMilling Operation: Milling includes a number of highly machining operation capable of producing a variety of configuration with the use of 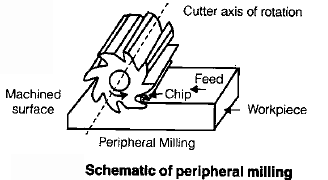 Face Milling  In the face milling operation, axis of rotation of cutter is perpendicular to the work. Because of the relative motion between the cutting teeth and work piece a face milling cutter leaves feeds marks on machine surface. 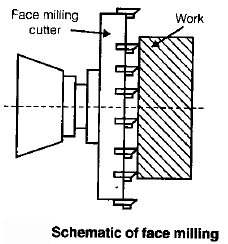 End millingEnd milling cutter are combination of both slab milling and face milling operation. An end mill cutter is used to machine and produce a flat surface or a pair of parallel flat surfaces. 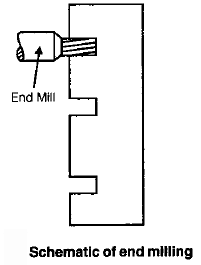 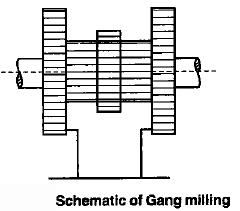 When miling is performed on two surfaces simultaneously, it is called STARDDLE MILLING. T-Slot milling is a unique example of straddle milling by a single milling cutter. 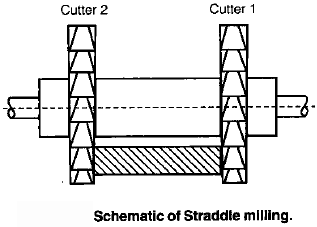