Traffic signs have been divided into 3 categories: (a) Regulatory signs (b) Warning signs and (c) Informatory signs

(i) Stop and Give Way Signs 

(iii) No parking and No stopping signs 

1. They provide orderly movement of traffic handling capacity of most of the intersections at grade.

3. When the signal system is properly coordinated, there  is a reasonable speed along the major road traffic.

4. Signals provide a chance to crossing traffic of minor road to cross the path of continuous flow of traffic stream at reasonable intervals of time.

5. Automatic traffic signal may work out tobe economical when compared to manual control.

1. The real-end collisions may increase.

2. Improper design and location of signals may lead to violations of the control system.

3. Failure of the signal due to electric power failure of any other defect may cause confusion to the road users.

Cycle: The period of time required for one complete sequence of signal indications is called cycle. 

Interval: Any of the division of the signal cycle during which signal indications do not change is called the interval.Type of Traffic Signals: The signals are classified  into the following types:

Do you know?This is the most efficient system of all the four types described above.Flashing Beacons 

1. Stop time or red phase R, of a signal is the sum of go and clearance intervals or green and amber phases for the cross flow i.e.

G2 + A2 at a two phase signal.2. Towards the end of red phase, there may be a short duration when the amber lights are put on along with red light signal in order to indicate 'get set' to go.This phase is the last part of red phase itself, and may be called ‘red-amber’ or ‘initial amber’.Do you know?The vehicles are not supposed to cross the stopline during the red amber period.

3. Clearance  time is provided just after the green phase before the red phase, to fulfil two requirements.

(a) Stopping time for approaching vehicle to stop at stopline after the signal changes from green to amber.

(b) Clea rance time for app roaching vehicles. Usually 2 to 4 seconds would be suitable for the amber phase.

4. Go time greentime is decided based on the approach volume during peak hour.

1. The pedestrian green time required are calculated based on walking speed of 12 m/sec. and initial walking time of 7.0 sec.

2. The cycle time is calculated after allowing amber time of 2 sec. each.

3. The minimum green time required for vehicular traffic on any of the approaches is limited to 16 secs.

Three types of delineators that may be used are:

The basic requirements of intersection at grade are: 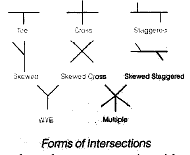 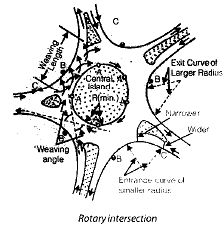 5. Width and Radius of Carriageway at entry and exit 

CONDITIONS WHEN TRAFFIC ROTARY IS JUSTIFIED

ADVANTAGES AND LIMITATIONS OFTRAFFIC ROTARY1. Crossing manoeuvre is converted into weaving or merging and diverging operations.2. The variable cost of operation of automobile is less at a traffic rotary than at a signalized intersection where the vehicles have to stop and proceed.3. The possible number of accidents and the severity of accidents are quite low because of low relative speed.

4. Rotaries can be constructed with advantage when the number of intersecting roads is between four and seven.5. The capacity of the rotary intersection is the highest of all other intersections at grade.

1. Rotary requires comparatively a large area of land and so where space is limited and costly as in built up areas, the total cost may be very high.

2. Where pedestrian traffic is large as in urban areas the rotary by itself cannot control the traffic and hence has to be supplemented by traffic police.

3. Where the angle of intersection of two roads is too acute or when there are more than seven intersecting roads, rotatery are unsuitable.

1. Maximum facility is given to the crossing traffic.As the roads are separate, this avoids necessity of stopping and avoids accidents while crossing.

2. There is increased safety for turning traffic and by indirect interchange ramp even right turn movement is made quite easy and safe by converting into diverging to left and merging from left.

3. The capacity of the grade operated intersection can practically approach that of the two cross roads.

4. It is possible to adopt grade separation for all likely angles and layout of intersecting roads.

1. It is very costly to provide complete grade separation and interchange facilities.

2. Where there is a limited right of way like built up or urban area or where the topography is not favorable, construction of grade separation is costly, difficult and undesirable.

3. In flat or plain terrain, grade separation may introduce undesirable crests and sags in the vertical alignment.

1. Troublesome drainage problems may be reduced by taking the major highway above the cross road.

3. In an over-pass of major highway, there is an aesthetic preference to the main through traffic and less feeling of restriction or confinement when compared with the under-pass.

1. In rolling terrain if the major road is to be taken above, the vertical profile will also have rolling grade line.

2. If the major highway is to be taken over by constructing high embankments and by providing steep gradients, the increased grade resistance may cause speed reduction on heavy vehicles.Here will be restrictions to sight distance unless long vertical curves are provided.

Advantages of an Underpass

1. The is a warning to traffic in advance due to the presence of an under pass which can be seen from distance.

Disadvantage of an Underpass

1. There may be troublesome drainage problems at the under pass, especially when the ground water level rises high during rainy season.

2. At under-pass the over head structure may restrict the vertical sight distance even at the valley curve near the under-pass.

3. There is a feeling of restriction to the traffic at the sides while passing along the under-pass and unless the clearance is sufficiently large, this may affect the capacity at the intersection.

4. There is no possibility of stage construction for the bridge structure at the under-pass.

1. Single side lighting is economical to install; but is suitable only for narrow roads. For wider roads with 3 or more laws the staggered system or the central lighting system may be adopted.

2. Lights are installed at closer spacings on curvces than on straights. The lights are located on the outer side of the curves to provide better visibility.

3. At summit curve lights should be installed at closer intervals near the summit.