The purest form of matter that are made up of a single type of atoms. E.g. Carbon (C), Oxygen (O).

Compounds are made up of two or more type of elements combined chemically in fixed ratio by their masses. E.g. Carbon dioxide (CO2).

The smallest constituent particles of matter that cannot be broken down further. E.g. Atom of oxygen is O, nitrogen N

The form of matter made up of two or more atoms that can exist independently. E.g. Oxygen and nitrogen can exist as single atom. They combine with another atom of their own kind to form a molecule of Oxygen i.e. O2 and nitrogen i.e. N2.

(i) Law of Conservation of mass : Mass can neither be created nor be destroyed. It can only be converted from one form to another.(ii) Law of Constant Proportion : Two or more elements combine in fixed proportions (ratio) by their mass to form a compound.Example

➢ IUPAC or International Union For Pure and Applied Chemistry approves the symbols for elements.➢ Atomic Number : Number of protons or electrons in an uncharged atom is known as its atomic number.➢ Atomic mass : Number of protons and neutrons in an atom is called its atomic mass. Its unit is atomic mass unit (amu or u).One atomic mass unit is defined as the one twelfth (1/12th) the mass of one carbon-12 atom.➢ For e.g. The atomic mass of oxygen atom is 16. It means that it is 16 times heavier than one twelfth (1/12th) the mass of one carbon-12 atom.➢ Some common elements and their atomic number and masses 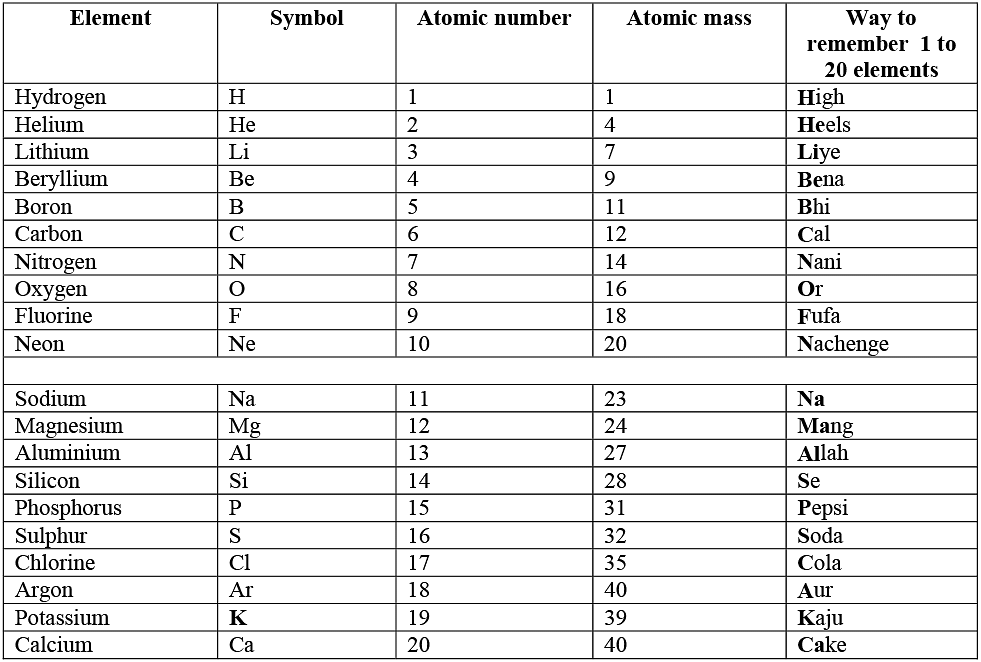 The form of matter made up of two or more atoms that can exist independently. E.g. Oxygen and nitrogen can exist as single atom. They combine with another atom of their own kind to form a molecule of Oxygen i.e. O2 and nitrogen i.e. N2.

(ii) Molecules of Compounds : Compounds are made up of two or more type of elements combined chemically in fixed ratio by their masses. E.g. Carbon dioxide (CO2).

An atom of carbon

The number of electron and protons is same in an uncharged atom. For example, Sodium’s atomic number is 11 and an uncharged atom of sodium contain 11 electrons as well as 11 protons.However, an atom can gain electrons to become negatively charged and a loose electron to become positively charged.Explanation : There are 11 electrons and 11 protons in a neutral sodium atom. If sodium loses one electron, the number of proton remain 11 and the number of electrons reduces to 10. Since, there is one more positive charge than negative sodium becomes positively charged.That can be written as

The symbolic representation of the composition of elements in a compound is called its chemical formula.➢ Valency : The combining capacity of an element of molecule is called its valency.Valency of some Ions:

➢ Molecular mass : Sum of atomic masses of all the atoms present in a molecule.For e.g. Atomic mass of Na2O = 2 x atomic mass of Na + atomic mass of oxygen= 2 x 23 + 16 = 62u.➢ Formula unit mass : Sum of atomic masses of all the atoms present in a formula unit or empirical formula of that compound.Empirical formula of a compound represents the elements of a compound in their simplest ratio regardless of their chemical composition.E.g.  Disulphur dioxide (S2O2) contains two atoms of both sulphur and oxygen.The empirical formula for disulphur dioxide (S2O2) is SO as the simplest ratio of 2 : 2 is 1 : 1.Molecular mass of disulphur dioxide = 2 * atomic mass of sulphur + 2 * atomic mass of oxygen= 2 * 32 + 2 * 16= 96uFormula unit mass or empirical mass of disulphur dioxide (S2O2)Empirical formula of disulphur dioxide = SOEmpirical or formula unit mass = 32 + 16 = 48uHowever, the formula unit mass and the molecular mass for compound which are already in the simplest ratio remains the same.➢ Mole concept : Mole is a unit. One mole of an atom or molecule is its atomic or molecular mass of that molecule in grams. The number of molecules in one mole of a substance is always fixed i.e. 6.022 * 1023 or the Avogadro number. The value 6.022 * 1023 is known as Avogadro’s number.➢ Example(i) Atomic mass of Sodium is 23uMass of one mole of sodium will be 23g and One mole of sodium will also contain 6.022 * 1023 molecules of sodium.(ii) Calcium chloride (CaCl2) Molecular mass of calcium chloride = 40 + 2 * 35.5 = 111uMolar mass of CaCl2 = 111g  No. of molecules in 1mole of CaCl2 = 6.022 * 1023 molecules.Mathematical calculations to find the mole and number of atoms can be done by unitary method or the following formulas:  (i) Number of moles = Given mass / Molar mass (ii) Number of moles = Given number of particles / Avogadro number