Chapter 3:Dams
DAMS IN GENERAL AND A FEW DAMS IN PARTICULAR:
A dam may be defined as an obstruction or a barrier built across a stream or a river. At the back of this barrier, water gets collected, forming a pool of water.The side on which water gets collected is called the upstream side, and the other side of the barrier is called the downstream side. The lake of water which is formed upstream is of tern called a reservoir, or a dam reservoir, or a river reservoir, or a storage reservoir.Various Type of Dams:Before we describe some of the famous dams of the of the world, it is worth while to classify the various types of dams.Most engineers recognise seven general types of dams. Three of them are ancient in origin, and four have come into general used only in the last about 100 years or so.

The three types of dams are discussed below:
(1) Earth Dams: Earth dams are made of soil that is pounded down solidly. They are built in areas where the foundation is not strong enough to bear the weight of a concrete dam, and where earth is more easily available as a building material compared to concrete or stone or rock.Some important earth dams of the world are :

(i) Green mountain dam on Colorado river in U.S.A.(ii) Swift dam in Washington in U.S.A.(iii) Side flanks of Nagarjun Sagar dam in India.(iv) Trinity Dam in California in U.S.A.(v) Maithan Dam in India (which is partly Earthen and partly Rockfill).

(2) Rockfill Dams: Rockfill are formed of loose rocks and boulders piled in the river bed. A slab of reinforced concrete is often laid across the upstream face of a rockfill dam to make it water-tight.

(3) Solid-masonry Gravity dams:
These are familiar to us by now, after we have talked about Aswan, Roosevelt, Hoover, and above all Bhakra dam.These big dams are expensive to be built but are  more durable and solid than earth and rock dams. They can be constructed on any dam site, where there is a natural foundation strong enough to bear the great weight of the dam.

These three types of dams were all found in ancient days. In recent times, four other types of dams have come into practice. They are : (4) Hollow masonry gravity dams ; (5) Timber dams ; (6) Steel dams ; and (7) Arch dams.

(4) The hollow masonry gravity dams:These are essentially designed on -.he same lines on which the solid masonry gravity dams are designed.But they contain less concrete or masonry ; about 35 to 40% or so. Generally, the weight of water is carried by a deck of R.C.C. or by arches that share the weight burden. They are difficult to build and are adopted only if very skilled labour is easily available, otherwise the labour cost is too high to build its complex structure.

(5) Steel dams: These are not used for major works. Today, steel dams are _sed as temporary coffer dams needed for the construction of permanent dams. Steel coffer dams are usually reinforced with timber 6r earthfill.

(6) Timber dams: These are short lived, since in a few years time, rotting sets Their life is not more than 30 to 40 years and must have regular maintenance during that time. However they are valuable in agricultural areas, where a cattle raiser may need a pool for his live stock to drink from, and for meeting other such low-level needs.

(7) Arch dams: Arch dams are very complex and complicated. They make use of the horizontal arch action in place of weight to hold back the water. They are best suited at sites where the dam must be extremely high and narrow.

Selection of the Type of Dam and Their Classifications:
Dams can be classified in various ways depending upon the purpose of the classification.

(2) Classification According to Use:
(i) Storage Dams: They are constructed in order to store water during the periods of surplus water supply, to be used later during the periods of deficient supply. The stored water may be used in different seasons and for different uses.They may be further classified depending upon the specific use of this water, such as navigation, recreation, water supply, fish, electricity, etc.

(ii) Diversion Dams: These small dams are used to raise the river water level, in order to feed an off-taking canal and or some other conveyance systems. They are very useful as irrigation development works. A diversion dam is generally called a weir or a barrage.

(iii) The Detention Dams: They detain foodwaters temporarily so as to retard flood runoff and thus minimise the bad effects of sudden flood.Detention dams are sometimes constructed to trap sediment. They are often called debris dams.

(3) Classification According to Hydraulic Designs:
(i) Overflow Dams:
They are designed to pass the surplus water over their crest. They are often called Spillways. They should be made of materials which will not be eroded by such discharges.

(ii) Non-overflow Dams:
They are those which are not designed to be over-topped. This type of design gives us wider choice of materials including earthfill and rockfill dams.Many a times, the overflow dam and the nonoverflow dam are combined together to form a composite single structure.

Selection of Dam Site:
The selection of a site for constructing a dam should be governed by the following factors:
(1) Suitable foundations (as deter-mined in the previous article) must be available.
(2) For economy, the length of the dam should be as small as possible, and for a given height, it should store the maximum volume of water. It, therefore, follows, that the river valley at the dam site should be narrow but should open outupstream to provide a large basin for a reservoir.A general configuration of con-tours for a suitable site is shown in Fig. 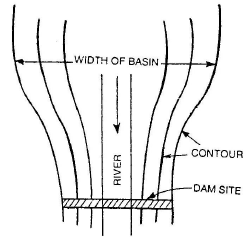 (3) The general bed level at dam site should preferably be higher than that of the river basin.This will reduce the height of the dam and will facilitate the drainage problem.

(4) A suitable site for the spillway should be available in the near vicinity. If ‘he spillway is to be combined with the dam, the width of the gorge should be such as to accommodate both.

The best dam site is one, in which a narrow deep gorge is separated from the flank by a hil-lock with its surface above the dam, as shown in Fig. 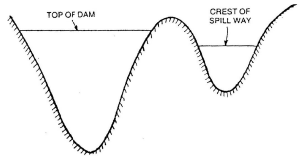 If such a site is available, the spillway can be located separate-ly in the flank, and the main valley spanned by an earthen or similar dam. Sometimes, the spillway and concrete masonry dam may be compositely spanned in the main gorge, while the flanks are in earth at low cost.

(5) Materials required for the construction should be easily available, either locally or in the near vicinity, so that the cost of transporting them is as low as possible.
(6) The reservoir basin should be reasonably watertight. The stored water ishould not escape out through its side walls and bed. (7) The value of land and property submerged by the proposed dam should be jas low as possible. (8) The dam site should be easily accessible, so that it can be economically connected to important towns and cities by rails, roads, etc. (9) Site for establishing labour colonies and a healthy environment should be available in the near vicinity.

DESIGN AND CONSTRUCTION OF GRAVITY DAMS:
Force acting on gravity Dam The various external forces acting on a gravity dam may be:

(1) Water Pressure (2) Uplift Pressure (3) Pressure due to earthquake forces (4) Silt Pressure (5) Wave Pressure (6) Ice Pressure (7)The stabilising force is the weight of the dam itself.

These three types of dams are described below:

(1) Homogeneous Embankment Type: The simplest type of an earthen embankment consists of a single material and is homogeneous throughout.Sometimes, a blanket of relatively impervious material may be placed on the upstream face. A purely homogeneous section is used, When only one type of material is economically or locally available. Such a section is used for low to moderately high dams and for levees. Large dams are seldom designed as homogeneous embankments. 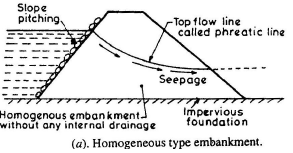 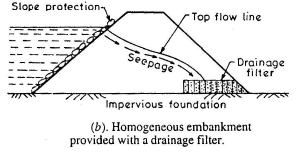 (2) Zoned Embankment Type: Zoned embankments are usually provided with a central impervious core, covered by a comparatively pervious transition zone, which is finally surrounded by a much more pervious outer zone .

The central core checks the seepage. The transition zone prevents piping through cracks which may develop in the core. The outer zone gives stability to the central impervious fill and also distribute the load over a large area of foundations.

This type of embankments are widely constructed and then materials of the zones are selected depending upon their availabilities. Clay, inspite of it being highly impervious, may not make the best core, if it shrinks and swells too much. Due to this reason, clay is sometimes mixed with fine sand or fine gravel, so as to use it as the most suitable material for the central impervious core. Silts or silty clays may be used as the satisfactory central core materials. Freely draining materials, such as coarse sands and gravels, are used in the  outer shell.Transition filters are provided between the inner zone and the outer zone, as shown in figure. This type of transition filters are always provided, wherever there is an abrupt change of permeability from one zone to the other.

(3) Diaphragm Type Embankments:Diaphragm type embankments have a thin impervious core, which is surrounded by earth or rock fill. The impervious other material. It acts as a water barrier to prevent seepage through the dam. The diaphragm may be placed either at the centre as a central vertical core or at the upstream face as a blanket. The diaphragm must also be  tied to the bed rock or to a very impervious foundation material, if excessive under seepage through the existing previous foundations has to be avoided. 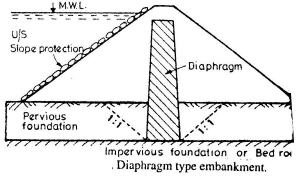