NTRODUCTIONGears uses no intermediate link or connector and transmit the motion by direct contact. The two bodies have either a rolling or a sliding motion along the tangent at the point of contact. But under sliding or slipping they are called rollers and under no slidding or sliping they are called grears. No motion is possible along the common normal as that will either break the contact or one body will tend to penetrate into the other.

CLASSIFICATION OF GEARS BASED OF THE ARRANGEMENT OF SHAFT1. Parallel shaftA. Spur Gears : They have straight teeth and parallel to the axis of rotation and thus are not subjected to axial thrust due to tooth load. 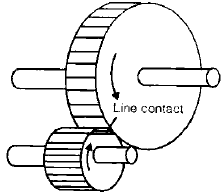 B. Spur Rack and Pinion : Spur rack is a special case of spur gear where it is made of infinite diameter so that the pith surface is plane. Here rotary motion is converted into translatory motion or vice-versa. It is used in lathe in which the rack transmits motion to the saddle.

C. Helical gears or Helical spur gears:- In helical gears, the teeth are straight but inclined to axis of rotation. Two mating gears have the same helix angle but have teeth of opposite lands. 2. Intersecting ShaftThe motion between two intersecting shafts is equivalent to the rolling of two cones assuming no slipping.

A. Straight bevel Gears: The teeth are Straight, radial to the point of intersection of the shaft axis and are tapered in cross-section throughout their length. 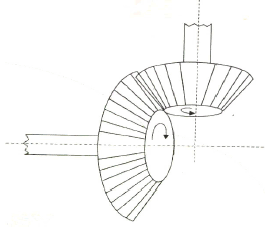 B. Spiral bevel Gears: When the teeth of a bevel gear are inclined at angle to the face of the bevel, they are known as spiral bevel or helical bevels. Pitch Circle : It is an imaginary circle drawn in such a way that a pure rolling motion on this circle gives the motion which is exactly similar to the gear motion. The standard value of pressure angle are If the curved surfaces of the two teeth of the gears have to remain in contact one should have a sliding motion relative to the other along the common tangent.Velocity of sliding = (ω1 + ω2) PC= Sum of angular velocities X distance between the pitch point and point of contact.

(ii) Involute Profile  Involute is a curve generated by point on a tangent which rolls on a circle without slipping. The involute profile on a gear will be generated through a generating circle and this generating circle is known as base circle. Its radius will not change in any condition for a gear.

• Maximum number of teeth on the wheel for the given values of the gear ratio STUDENT CORNERthe pressure angle and the addendum coefficient (aw). 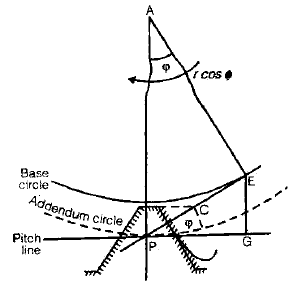 CONDITION FOR INTERCHANGEABLE GEARSThe gears are inter changeable if they have 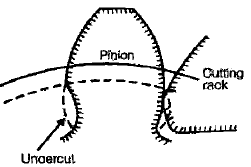 COMPARISON OF CYCLOIDAL AND INVOLUTE PROFILE

(a) Pressure angle varies from maximum at the beginning of engagement, reduces to zero at the pitch point and again increases to maximum at the end of engagement resulting in less smooth running of the gears.(b) It involves double curve for the teeth, epicycloid and hypocycloid. This complicates the manufacture.(c) Owing to difficulty of manufacture, these are costlier.(d) Exact centre distance is required to transmit a constant velocity ratio.(e) Phenomenon of interference does not occur at all,(f) the teeth have wider flanks and thus are stronger(g) In this a convex flank always has contact with a concave face resulting in less wear.

Involute Teeth(a) Pressure angle is constant throughout the engagement of teeth. This results in smooth running of the gears.(b) It involves single curve for the teeth resulting in simplicity of manufacturing and to tools.(c) These are simple to manufacture and thus are cheaper.(d) A little variation in the centre distance does not affect the velocity ratio.(e) Interference can occur if the condition of minimum number of teeth on a gear is not followed(f) The teeth have radial flanks and thus are weaker as compared to the cycloidal form for the same pitch(g) Two convex surfaces are in contact and thus there is more wear.