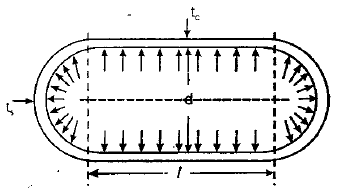 Thus, equating the two strains in order that there shall be no distortion of the junction.

This means thickness of cylindrical part should be more than the hemispherical part.

its diameter then it is called thick shell.

The following three types of stresses are existing in thick cylinders :

Hoop stress, is given by

Radial pressure is given by