A pathline is a curve traced by a single fluid particle during its motion. The path can cross each other. 

Stream lines are drawn through a closed curve, they form a boundary surface across which fluid cannot penetrate.  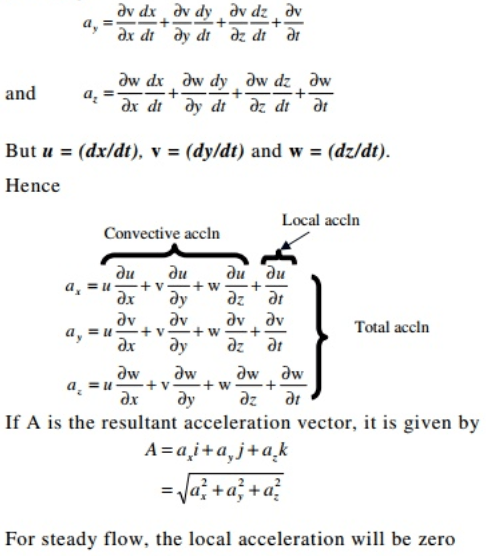 For compressible and 3 dimensional unsteady flow

For compressible one dimensional flow

For incompressible one dimensional flow

The circulation, C, about a closed contour in a fluid is defined as the line integral evaluated along the contour of the component of the velocity vector that is locally tangent to the contour.

In continuum mechanics, the vorticity is a pseudovector field that describes the local spinning motion of a continuum near some point (the tendency of something to rotate, as would be seen by an observer located at that point and traveling along with the flow.

The vorticity equation of fluid dynamics describes evolution of the vorticity ω of a particle of a fluid as it moves with its flow, that is, the local rotation of the fluid (in terms of vector calculus this is the curl of the flow velocity). The equation is:

where Dt is the material derivative operator, u is the flow velocity, ρ is the local fluid density, p is the local pressure, τ is the viscous stress tensor and B represents the sum of the external body forces.