The sub surface flow below a weir causes two definite instability problems as below.1. Up lift forces due to the sub soil pressure that tends to lift up the barrage raft floor.2. Upward rising seepage forces through the river bed just downstream of the solid apron causing sand particles to erupt upwards and tends to piping failure of the foundation. Where,h′ – t = h = Ordinate of the H.G line above the top of the floorG – 1 = Submerged specific gravity of the floor materialLane’s weighted creep theory: It is same as Bligh’s theory but weightage of horizontal length is (1/3) and for vertical it is 1.Therefore, L=LH/3+LV

Khosla’s theory: The main principles of this theory are summarized below:(a) The seepage water does not creep along the bottom contour of pucca flood as started by Bligh, but on the other hand, this water moves along a set of stream-lines. This steady seepage in a vertical plane for a homogeneous soil can be expressed by Laplacian equation:

Where, φ = Flow potential = Kh; K = the co-efficient of permeability of soil as defined byDarcy’s law, and h is the residual head at any point within the soil.The above equation represents two sets of curves intersecting each other orthogonally. The resultant flow diagram showing both of the curves is called a Flow Net.Stream Lines:The streamlines represent the paths along which the water flows through the sub-soil.Every particle entering the soil at a given point upstream of the work, will trace out its own path and will represent a streamline. The first streamline follows the bottom contour of the works and is the same as Bligh’s path of creep. The remaining streamlines follows smooth curves transiting slowly from the outline of the foundation to a semi-ellipse, as shown below. (2) The seepage water exerts a force at each point in the direction of flow and tangential to the streamlines as shown in figure above. This force (F) has an upward component from the point where the streamlines turns upward. For soil grains to remain stable, the upward component of this force should be counterbalanced by the submerged weight of the soil grain. This force has the maximum disturbing tendency at the exit end, because the direction of this force at the exit point is vertically upward, and hence full force acts as its upward component. For the soil grain to remain stable, the submerged weight of soil grain should be more than this upward disturbing force. The disturbing force at any point is proportional to the gradient of pressure of water at that point (i.e. dp/dt). This gradient of pressure of water at the exit end is called the exit gradient. In order that the soil particles at exit remain stable, the upward pressure at exit should be safe. In other words, the exit gradient should be safe.Critical exit gradient:

Khosla's expression for exit gradient:It has been determined that for a standard form consisting of a floor length b with a vertical cutoff of depth d, the exit gradient at its downstream end is given by

b = horizontal distance between entry and exit points of impervious floor.

1. A composite profile is split into a no. of simple elementary standard forms for which the mathematical solution can easily be obtained.2. Each elementary form is then treated independent of the other and the pressures at its key points of the entire structure.3. Then the solutions of these elementary forms are superposed to obtain the pressure distribution at all the key points of the entire structure.4. Further these pressures are to be corrected as the individual pressures have been obtained based on the assumption.(a)the floor is of negligible thickness.(b)there is only one pile line.(c)the floor is horizontal.5. Apply correction for these assumptions. (a) Thickness. (b)  Interference (c) slope.Uplift pressures at key points in elementary cases. 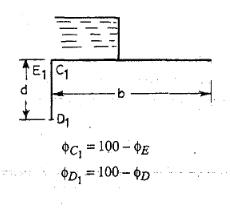 Correction for interference of piles:The correction C to be-applied as percentage of head due to this effect, is given by The correction factor given above is to be multiplied by the horizontal length of the slope and divided by the distance between the two pile lines between which the sloping floor is located. This correction is applicable only to the key points of the pile line fixed at the start or the end of the slope.

Thus, in Fig above, this correction is applicable only to point E2. Since the slope is down at point E2 in the direction of flow, hence, the correction shall be+ ve and will be equal to the correction factor for this slope (Table above) multiplied by bs/b1, where bs and b1 are shown in Fig above.