Aggregate crushing value gives the Crushing strength of aggregate up to which it can bear the load without fail. To conduct crushing strength test we need compression testing machine, cylindrical measure, plunger and Isa sieves.

First sieve the sample aggregate, aggregate passing 12.5mm sieve and retaining 10mm sieve is oven dries at 100-1100C for 3-4 hrs. The cylinder is filled with aggregate in 3 layers, 25 strokes of tampering for each later. Note down its weight and insert the plunger and placed it on compression testing machine. Apply the load at uniform rate of 40 tonnes load in 10 minutes. Then stop the machine and crushed aggregate is sieved through 2.36mm sieve and aggregate passing 2.36mm sieve is weighed.
Aggregate crushing value can be obtained from below formula:

(b) Aggregate Impact value test:
Impact value of aggregate will give aggregate capability against sudden loads or forces. For this test also aggregate passing through 12.5mm and retained on 10mm sieve is taken and oven dried.

Fill the cylinder with aggregate in 3 layers, 25 strokes of tamping for each layer. Weight w1 noted. The cylinder is placed in impact testing machine which consist a hammer. After placing the cylinder, hammer is raised to 380mm and release freely. Then it will blow the aggregates. Repeat it for 15 such blows. After that take down the sample and aggregate passing through 2.36mm sieve is weighed as w2.

For this test, the sample taken should be clean and dried. The sample is weighed W1 and placed in Los Angeles testing machine and the machine is operated. Machine should be rotated at a speed of 20-33 revolutions per minute. After 1000 revolutions the sample is taken out and sieved through 1.7mm sieve. Sample retained on 1.7mm is washed and dried and note down its weight W2.

(d) Shape Tests:
The particle shape of the aggregate mass is determined by the percentage of flaky and elongated particles in it. Aggregates which are flaky or elongated are detrimental to higher workability and stability of mixes.
-Flakiness Index Test :
-F. I. of the aggregate is the percentage of the particles present in it having their least size smaller the 3/5th of their mean size.
-This test is not valid for the aggregate having size smaller than 6.3 mm.
-In order to perform  this test sufficient quantity of aggregate is taken such that 200 pieces of each fraction can be tested.
-This test is performed with the help of metal thickness gauge which consists of no of openings through which aggregate of different fractions are passed piece by piece & the wt. of the aggregate passing through all the openings expressed as the percentage of original wt. of aggregates, is termed as Flakiness Index. 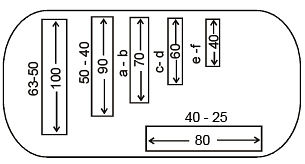 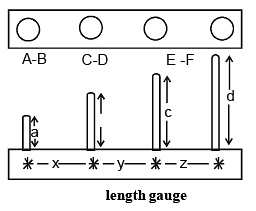