Inertia force, F1 = – m fgm = mass of bodyfg = acceleration of centre of mass of the body

Thus a dynamic analysis problem is reduced to one requiring static analysis.

where k = radius of gyrationVelocity And Acceleration of Piston

The negative sign indicates that the sense of angular acceleration of the rod is such that it tends to reduce the angle b.Piston Effort (Effective Driving Force)

The mass of connecting rod can be replaced by two point masses at two point, if it is ensured that the two masses together have the same dynamical properties as before.FLYWHEELFunction 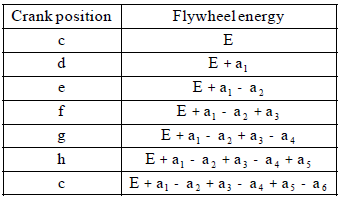