All the electric cables consist of three essential parts. 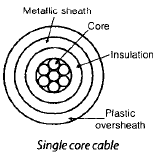 General Construction of Cable The underground cable used for transmission of power at high voltage consists of one central core or a number of cores (two, three or four) of tinned stranded copper conductors (sometimes use of aluminium conductor is also made) insulated from each other by paper or varnished cambric or vulcanized bitumen or impregnated paper. A metallic sheath of lead or alloy or of aluminium is provided around the insulation to protect it against ingress of moisture. For the protection of metallic sheath against corrosion and from mechanical injury from the armouring a layer of bedding consisting of paper tape compounded with fibrous material is provided over the metallic sheath.

Copper  The used of copper is limited to cables used for control circuits, signalling and communications. 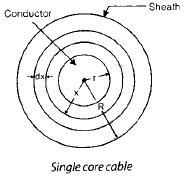 Where r is the resistivity of the insulating material in W-m and l is the length of cable in metres. 

 Capacitance between core and sheath

These are used only upto 11 kB. In these cables a potential difference exists between any two pairs of conductors and also between each conductor and sheath. 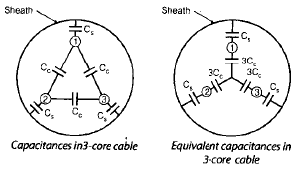 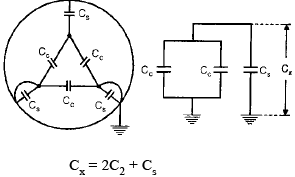 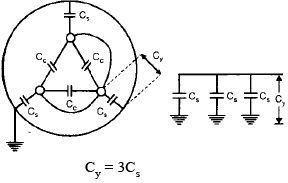 Capacitance between each conductor and sheath

Electrostatic stress Let r be the radius of the conductor, R the inner radius of the sheath, Î the permittivity of the dielectric, q the charge per unit length.  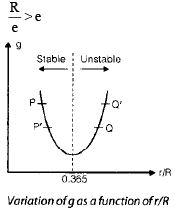 Thus Ex is constant throughout the thickness of insulations. 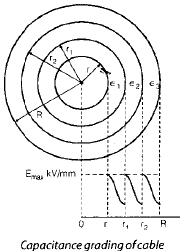 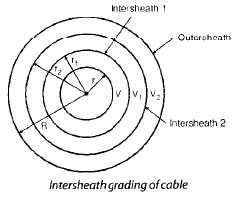