Based on the structural behaviour, pavements are of following types.

The pavement load is ultimately taken by soil subgrade hence in no case it should be over stressed and top 50 cm layer of soil subgrade should be well compacted at O.M.C. (Optimum moistore content)

2. Sub-base and Base Course

Total load influences the quality of surface course.Do you know ?

Notation have their usual meaning. 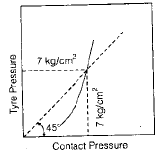 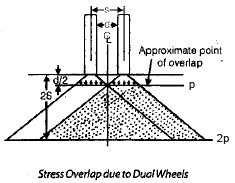 ESWL can be determined graphically. Two points A and B are plotted on the loglog graph with coordinates of  (P, (d/A)),B(2p,2S) 2 line AB is a plot which isthe locus of points where any single wheel load is equivalent to a certain set of dual wheels.

 If rigid circular plate is used instead of flexible then

(b) Sem i Empirical or semitheoretical method

This expression is applicable only when the CBR value of the subgrade soil is less than 12%.

1. CBR test should be performed on remoulded soils in the laboratory, insitu test are not recommended for design purpose.

2. The soil should be compacted at OMC (Optimum moisture content) to proctor density.

3. Test samples should be soaked in water for 4 days period before testing. However in dry zone (< 50 cm rainfall) it is not necessary to soak.

6. Following formula may be used in case estimating future heavy vehicles in view of growth rate for design.A = P [1 + r](n + 10)

7. The deisgn thickness is considered applicable for single axle loads upto 8200 kg and tandem axle loads up to 14500 kg. For higher axle loads, the thickness values should be further increased.

8. When sub base course materials contain substantial proportion of aggregates of size above 20 mm, the CBR value of the materials would not be valid for the design of subsequent layer above them.

California Resistance Value Method Total thickness of pavement is given by

Where, K = numerical constant = 0.166 T.I. = traffic index = 1.35 (EWL)0.11R = Stabilometer resistance value C = Cohesionmeter value.The annual value of (EWL) here is the accumulated sum of the products of the constants and the number of the axle loads.Equivalent C Value

Where t1 and t2 are thickness of any two pavement layer and C1 and C2 are their corresponding chohesionmeter values.Material Soil cement base course Bituminous concrete Open graded bituminous mix Gravel base course

1. Material in the pavement layers are isotropic, homogenous and elastic. The pavement forms stiffer reinforcing layer than under lying layer.

3. The layers are in continuous contact; the top layer is free of shearing and normal stresses out side the loaded area.

4. This approach utilizes reinforcing action pavement layer in which

Relative stiffness of slab to subgrade :

These can be of two types(a) Warping stresses(b) Frictional stresses.

Critical Load Positions (a) Interior loading : Load is applied in the interior of the slab.

(b) Edge loading : Load is applied at the edge of slab other than corners.

(c) Corner loading : Centre of the load is located on bisector of the corner angle and loaded area is at the corner touching the two corner edges. Design of joints in cement concrete pavement Joint may be classiofied as :

2. Longitudinal Joints The location of these joints are shown.

If δ1 be the half of the joint width, the spacing of expansion joint Le is given by

Type of Joint Filler (a) Soft wood (b) Impregnated fibre board (c) cook or cork bound with bitumen Do you know ?The bitumen content specified by IRC is 35%