Remember:• In synchronous machine 3 - ø armature winding is on stator and field winding on rotor.

• In cylindrical rotor synchronous machine, the air-gap is uniform throughout, neglecting the slot-openings.• Synchronous generators are usually of 3 - ø  type because of the several advantage associated with 3 - ø  generation, transmission and high-power utilization.

• For the generation of 3 - ø voltage, at least three coils (one coil per phase), phase displaced by 120 electrical degrees in space, are required. 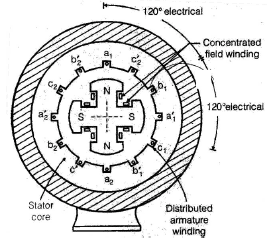 Generated EMFIn this type of machines, air-gap flux is constant in amplitude.

Cylindrical Rotor Synchronous Machines• The alternator terminal voltage at no load is made equal to its rated value by adjusting its field current.• Generated emf lags by 90º the flux that generates it. This is indicated in Figure, where Ef is shown lagging øf by 90º. 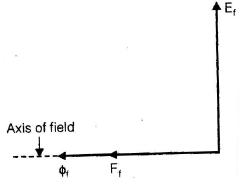 • Field mmf per pole Ff is equal to If Nf . As saturation is ignored, field flux phasor øf is also indicated in phase with field mmf Ff. 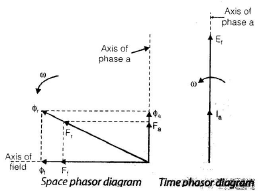 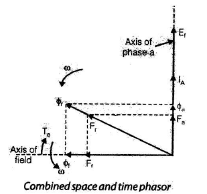 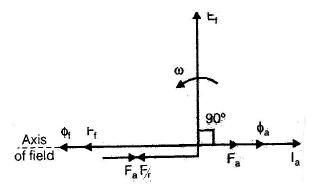 • Ef is shown lagging øf by 90º, Ia leads Ef by 90º and Fa is in phase with Ff so that resultant mmf Fr = algebraic sum of Ff and Fa.• Flux created by armature mmf Fa directly aids the field mmf Ff or the field flux øf . 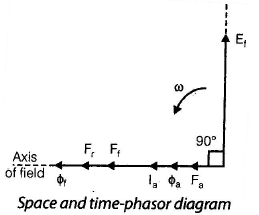 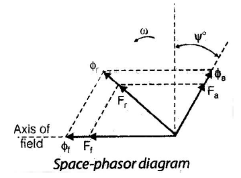 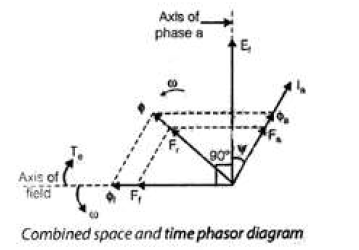 Cylindrical-rotor Synchronous Motor• Rotating armature mmf phasor Fa is in phase with Ia. Armature-reaction flux øa is also in phase with Fa.• The resultant mmf Fr is obtained by the phasor sum of Fa and Ff, i.e.

• For motor operation, the field poles must be dragged behind the resultant air-gap flux by the retarding shaft-load torque. 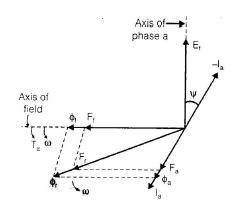 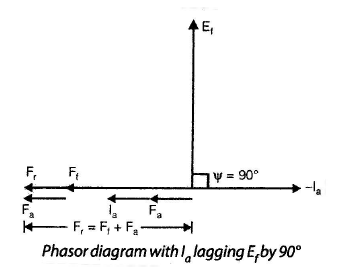 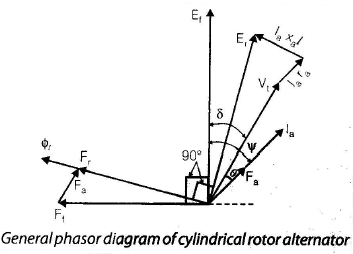 Note:• These are useful for finding out the parameters of the synchronous machines and determine their performance.• For obtaining the open-circuit characteristic (OCC), the alternator is driven at constant rated speed and the open circuit terminal voltage isnoted as the field current is gradually increased from zero. 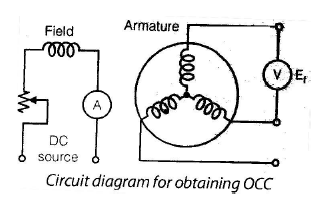 • The OCC is a graph between the field current If or field mmf Ff and the generated emf Ef.• At small value of field current or Ff, the air gap requires almost the whole of Ff and mmf required by the iron is almost negligible. But when the mmf has exceeded a certain value, the iron parts require a good amount of mmf and the saturation sets in.

Short Circuit Characteristics• For obtaining the short-circuit characteristics, the machine is driven at rated synchronous speed and the armature terminals are shot-circuited through an ammeter. 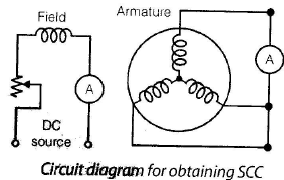 • Alternator during SC test operates under unsaturated conditions and as a result SCC is a straight line. 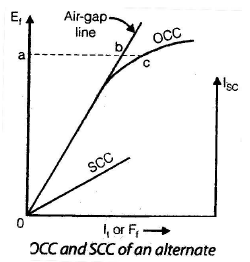 Zero Power-Factor Characteristic and Potier Triangle• z.p.f.c. of an alternator is a plot between armature terminal voltage and its field current for constant values of armature current and speed.• z.p.f.c. in conjugation with OCC, is useful in obtaining the armature leakage reactance xal and armature reaction mmf Fa.• For an alternator, zero-power-facto characteristic is obtained as follow: 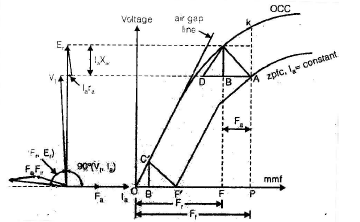 • From this figure the terminal voltage V1 and the air gap voltage Er, are very nearly in phaseVt = Er – IaxaI• The resultant m.m.f. Fr and the field m.m.f. F1 are also related by the simple algebraic equation

Voltage Regulation of an Alternator

• Here E1 is the no-load excitation voltage and Vt is full-load terminal voltage at the same speed and field excitation.• In large machines, it may not be possible to obtain the voltage regulation by actual loading, because of the cost of dissipating the huge output and also providing the large input. Certain simple tests, involving only small amounts of power, are conducted and from these, the machine constants are determined to compute the voltage regulation

Methods for Computing Voltage RegulationElectromotive Force (emf) Method• Also known as synchronous impedance method• This method can be applied to cylindrical rotor synchronous machines only, because the resultant air-gap flux ør is not affected by the angular position of the rotor.

Assumptions:• The iron par of the magnetic circuit is have constant permeability.• As the saturation is neglected the mmf can be replaced by their corresponding fluxes and therefore, the corresponding emfs. 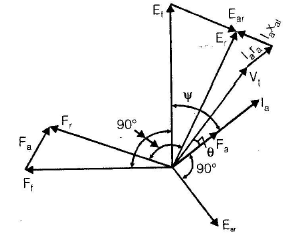 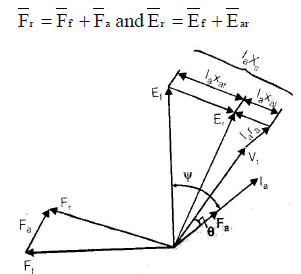 Here K is the slope of the air-gap line

• The armature -reaction mmf Fa- is in phase with, and proportional to, armature current la.

where C is a constant.

• As CK has the dimension of a reactance we can assume.

NOTE:-• Xai is a fictitious reactance and it accounts for the voltage Ear generated by armature reaction mmf Fa.• The term (ra + jXs) = Zs, is called the synchronous impedance of the cylindrical- rotor synchronous machine. 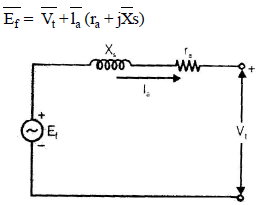 Measurement of Zs and Xs• Open-circuit and short circuit characteristics are required for the determination of Zs and Xs. 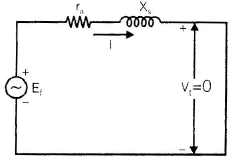 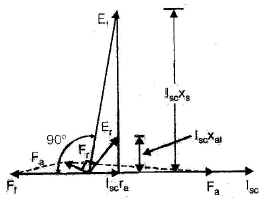 NOTE:• If there were no saturation, Zs would be constant. Actually Zs is variable and it decreases with the onset of saturation in the OCC. 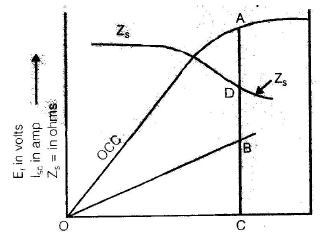 • The dc resistance rdc of one phase is measured, by voltmeter ammeter method.• If the armature winding is star connected and neutral is not available, then

• In case the armature winding is delta-connected, then

• The effective armature resistance per phase

• After ra is calculated , Xs can be determined.Voltage phasor Diagram 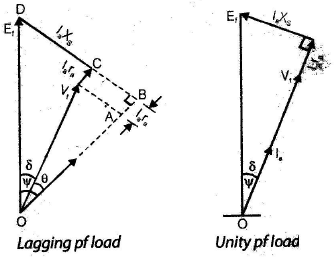 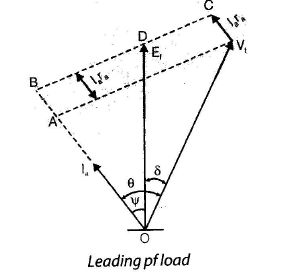 • Now the voltage regulation in percentage

Assumption:• Each emf is replaced by an equivalent mmf (uniform air-gap and neglect of saturation.)• The voltage equation of a synchronous machine, working as an alternator

The field mmf Ff induces, in the armature winding, an emf Ef lagging it by 90º, similarly the mmf Fr must induce an emf E' lagging Fr1 by 90º. 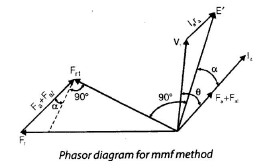 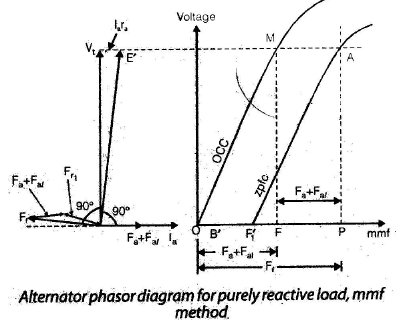 • α is the angle (i) by which la lags E' and (ii) between the normal line of Fr1 and (Fa + Fal).• To obtain voltage regulation by mmf method 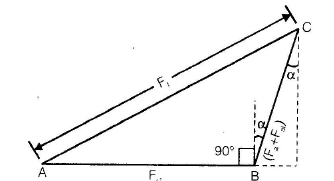 corresponding to field mm Ff , obtain Ef from OCC and thus the voltage regulation of the alternator.

Zero Power factor Method• The emfs are handled as voltage and the mmfs as field ampere-turns of field amperes.• The armature reaction mmf Fa and armature leakage reactance Xal , can be determined from the potier triangle, as explained before

is obtained and corresponding to Ff . excitation voltage Ef is recorded from OCC and the voltage regulation obtained. 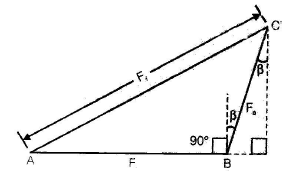 NOTE:• This method is essentially a modification of the mmf method and gives satisfactory results both for cylindrical rotor and salient pole synchronous machines. 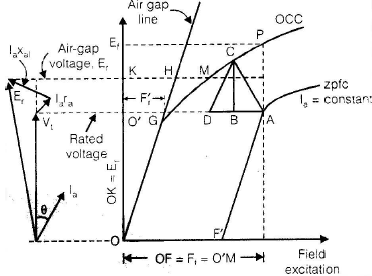 • New ASA method requires OCC and zpfc. Only two points A and F', are sufficient to be known on the zpfc.• The point A is obtained by loading the overexcited alternator by an underexcited synchronous motor till full load armature current at rated voltage is flowing.• The point F' is obtained by noting field excitation (fa + fal ), required to circulate full load armature current when the alternator is short-circuited.• The armature leakage reactance Xal is determined from the potier reactance drop BC.

and use the magnitude of Er in obtaining the saturation effects.Ok = Er . This line intersects the air gap line at H and the OCC at M. The distance HM, On the field excitation scale, gives the additional excitation that must be added to the unsaturated excitation O'H, to determine the total excitation O'M = Ff .• Corresponding to O'M = Ff = OF, excitation voltage FP = EF is read from OCC and the voltage regulation obtained.

Saturation Synchronous Reactance Method• In emf and mmf methods, the saturation was neglected. But under actual operating conditions, the magnetic circuit is always in a saturated state.• The extent of this saturation under load, can be taken into account by introducing saturation factor k. 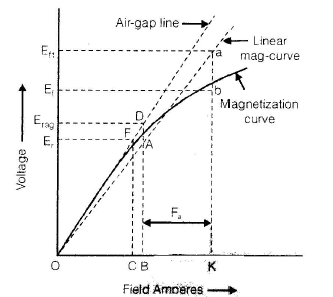 for the same field mmf or field current.

for the same field current.

• In order to use the saturated synchronous reactance method: