These are multiplayer (5 layers), three terminals semiconductor devices which operate in both direction (quadrant I and III). In other words, there are two SCRs connected in anti-parallel. These operate in the same manner as an SCR in either direction. Triac activates on either a positive or negative gate voltage i.e. it can be triggered into conduction when gate is either positive or negative w.r.t. T1. 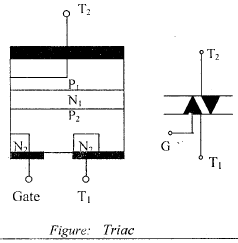 The current-voltage characteristic of the triac is symmetrical about the origin as shown in figure.

The operating modes of the triac are given in the table. Triacs are usually most sensitive to gate current in the I+ and III– modes, and least sensitive in the mode III . The gate current IGT, required to trigger as triac is typically 40 mA in the T and III” modes, and 60-100 mA in the I” and I1I+ modes. The main disadvantage with triacs is that the positive breakdown voltage is different than its negative breakdown voltage.