THEORY OF PURE BENDINGFollowing results may be drawn form the observation of pure  bending:

However they remain straight after the deformation.This means plane section before bending remains plane after bending.

Let s be the longitudinal stress produced by bending then we have,

Assumptions  made in the theory of simple bending: (i) The beam is initially straight. (ii) The beam has constant cross sectional area, with an axis of symmetry. the axis of symmetry is vertical. (iii) The material is homogeneous  & isotropic (iv) Hooke's law is valid. (v) Plane transverse section remains plane after bending. (vi) Every layer of material is  free to expand or contract longitudinally and laterally under stress and do not exert pressure upon each other. Thus the poison's effect and the interface of the adjoining differently stressed fibre are ignored. (vii)The value  of Young's modulus (E) for the material is the same in tension and in compression

Standard result to be noted:

For maximum strength, Z should be maximumHence

• Three beams have the same length, same allowable bending stress and are subjected to the same maximum bending moment. The cross section of the beams are a circle, a square and rectangle with depth twice the width. Find the ratio of the weights of the circular and rectangular beams with respect to the square beams.

Following points may be noted with reference to above problem.(i) For maximum strength (Zmax), The portion EB to be cutoff is given by

(ii) Increase in the section modulus

(i) For a circular section it is possible to increase the section modulus by 0.7% by cutting the segmental portions shaded.(ii) The depth of segment d should be 0.011 times the diameter of the section. 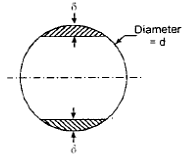 FLITCHED BEAMSFlitched beam is a composite section consisting of a wooden beam strengthened by metal plates. The arrangement is so connected that the components act together as one beam.

MOMENT OF RESISTANCE OF THE SECTION:

Hence the moment of resistance of the section is the same as that of a wooden member of breadth b + m (2t) and depth d. The rectangular section b + m (2t) units wide and d units deep is called the equivalent wooden section.

BEAMS OF UNIFORM STRENGTHFor economical design, the section of the beam may be reduced towards the support a since bending moment decrease towards the supports. The beam may be designed such that at every section, the extreme fibre stress reaches the permissible stress.A beam so designed is called a beam of uniform strength. There are three possible cases for such design.(1) Varying width by keeping constant depth.(2) Varying depth by keeping constant width.(3) Varying width & depth both. 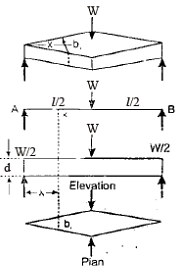 • The width of the beam at x is given by

• The width of the beam at mid span is given by 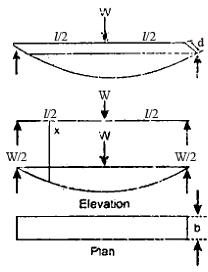