Isolated Footing Footings are structural elements that transfer loads from the building or individual columns to the earth. If these loads are to be properly transmitted, foundations must be and to provide adequate safety against sliding and overturning.Theoretically speaking isolated footings must be designed for both axial load and moment but practically isolated footings are designed only for axial load.

Spread footing: A spread footing or simply footing, is a type of shallow foundation used to transmit the load of an isolated column, or that of a wall, on the subsoil. In the case of wall, the footing is continuous while in the case of column, is a isolated.

Combined footings: A spread footing which supports two or more columns is termed as a combined footing. Such a footing is provided when the individual footings are either very near to each other, or overlap. Combined footings may either be rectangular or trapezoidal.

Strap or Cantilever footings:  A strap footing consists of spread footing of two columns connected by a strap beam. The strap beamdoes not remain in contact with soil, and thus does not transfer any pressure to the soil.

Mat or Raft foundation: A mat or raft is a combined footing that covers the entire area beneath a structure and supports all the walls and columns. When the available soil pressure is low or the building loads are heavy, the use of spread footing would cover more than one-half of the area and it may prove more economical to use mat or raft foundation.

Design Steps (i) Size of foundation Load from column = P Increase 10% of the total load Add weight of foundation (PF) = 0.1 P Total load PT = 1.1P (even for limit state method use unfactored load for calculation of area) Area of footing, 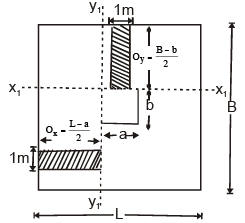 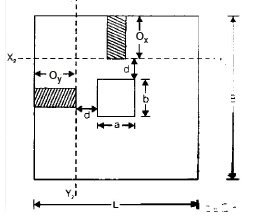 Find out maximum of Vx and Vy Nominal shear stress

where, tc is permissible design shear strength of concrete in N/mm2 as given in IS : 456 Footing should be always safe in shear. No shear reiforcement is provided. 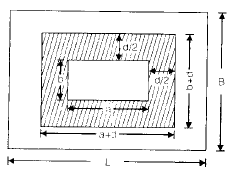 (Limit state method)ks = (0.5 + βc ) but not greater than 1, βc being the ratio of short side to long side of the column

(vi) Area of steel for the longer span The area of steel Ast of long bars parallel to direction L is calculated as under.For My moment

(Limit state method) This reinforcement is equally distributed over entire width B.

Note: Area of steel calculated above is for 1 m, width, Calculate this area for width B and distribute uniformly over entire width For B m, total area of steel = B × Ast 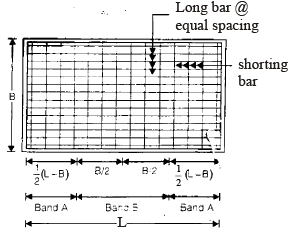