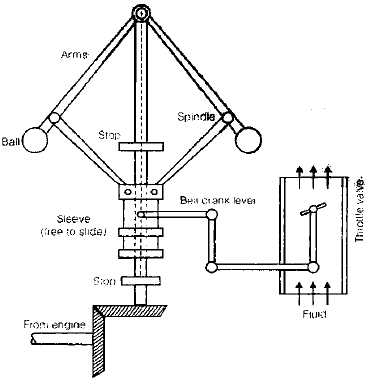 Hence the response of inertia governors is faster than that of centrifugal type. 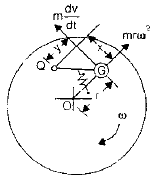 Let, r = Radial distance OGv = Tangential velocity of G =ωrω = Angular velocity of discCentrifugal force of the rotating mass,F = (radially outwards) mrω2If the engine shaft is accelerated due to increase in speed, the ball mass does not get accelerated at the same amount on account of its inertia, the inertia force being equal to 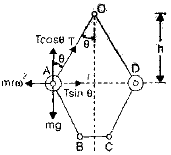 Let, m = mass of each ballh = height of governorw = weight of each ball (= mg)ω = angular velocity of the balls, arms and the sleeveT = tension in the armr = radial distance of ball-centre from spindle-axisN = Speed of rotation (rpm) 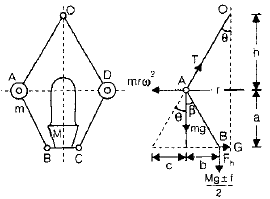 The instantaneous centre of rotation of the link AB is at I for the given configuration  of the governor. It is because the motion of its two points A and B relative to the link is know. The point A oscillates about the point O and B moves in a vertical direction parallel to the axis. Lines perpendicular to the direction of these motions locates the point I.Considering the equilibrium of the left-hand half of the governor and taking moments about I,

By solving it, we get 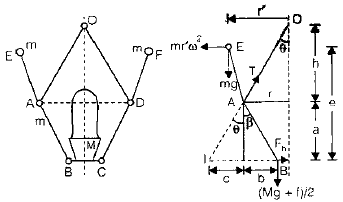 Considering the equilibrium of the link BAE which is under the actionThe weight of the ball, mgThe centrifugal force, mr'ω2The tension in the link AOThe horizontal reaction of the sleeveThe weight of sleeve and friction

As before, I is the instantaneous centre of the link BAETaking moments about I,

In the position when AE is vertical, i.e., m neglecting its obliquity

By solving above equation, we get

HARTNELL GOVERNORIn this governor, ball are controlled by a spring. 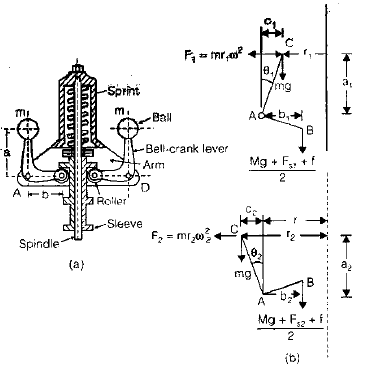 As the speed increases and the balls move away from the spindle axis, the bellcrank levers move on the pivot and lift the sleeve against the spring force. If the speed decreases, the sleeve moves downwards. The movement of the sleeve is communicated to the throttle of the engine. The spring force can be adjusted withthe help of a screw cap.Let, Centrifugal force (F) = mrω2Fs = Spring forceTaking moments about the fulcrum A,

Neglect obliquity of the arm in that case,

Now, from above equation

SENSITIVENESS OF GOVERNOR• A governor is said to be sensitive when it readily responds to a small change of speed.Sensitiveness =

HUNTINGSensitiveness of a governor is a desirable quality. However, if a governor is too sensitive, it may fluctuate continuously. This phenomenon of fluctuation is pronounced as hunting.

ISOCHRONISMA governor with sensitivity equal to infinity is treated as isochronous governor. For all position of sleeves, governor has same speed.

STABILITY A governor is said to be stable if it brings the speed of the engine to the required value and there is not much hunting. The ball masses, occupy a definite position for each speed of the engine within the working range. The stability and the sensitivity are two opposite characteristics.

POWER OF GOVERNORThe power of a governor is the work done at the sleeve for a given percentage change of speed.Power = Effort of governor × displacement

CONTROLLING FORCEControlling force is equal and opposite to the centrifugal force and acts readily inward. It is supplied by 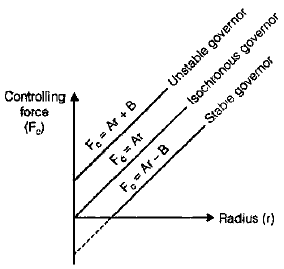 For a Porter governor

For a Hartnell governor