The document Chapter 7 - Boolean Algebra, Chapter Notes, Class 12, Computer Science | EduRev Notes is a part of the Class 12 Course COMPUTER SCIENCE for Class 12(XII) - CBSE & NCERT Curriculum.
All you need of Class 12 at this link: Class 12

Boolean algebra is an algebra that deals with Boolean values((TRUE and FALSE) . Everyday
we have to make logic decisions: “Should I carry the book or not?” , “Should I watch TV or not?” etc. Each question will have two answers yes or no, true or false. In Boolean Algebra we use 1 for true and 0 for false which are known as truth values.

Truth table:
A truth table is composed of one column for each input variable (for example, A and B), and one final column for all of the possible results of the logical operation that the table is meant to represent (for example, A XOR B). Each row of the truth table therefore contains one possible configuration of the input variables (for instance, A = true B = false), and the result of the operation for those values.

Logical Operators:
In Algebraic function e use +,-,*,/ operator but in case of Logical Function or Compound statement we use AND,OR & NOT operator. Example: He prefers Computer Science NOT IP.
There are three Basic Logical Operator:
1. NOT
2. OR
3. AND

NOT Operator—Operates on single variable. It gives the complement value of variable.

Basic Logic Gates
A logic gate is an physical device implementing a Boolean function, that is, it performs a logical operation on one or more logic inputs and produces a single logic output. Gates also called logic circuits.

A gate is simply an electronic circuit which operates on one or more signals to produce an output signal. NOT gate (inverter):The output Q is true when the input A is NOT true, the output is the inverse of the input:

Q = NOT A
A NOT gate can only have one input. A NOT gate is also called an inverter.

AND gate
The output Q is true if input A AND input B are both true: Q = A AND B An AND gate can have two or more inputs, its output is true if all inputs are true.

OR gate
The output Q is true if input A OR input B is true (or both of them are true): Q = A OR B An OR gate can have two or more inputs, its output is true if at least one input is true. 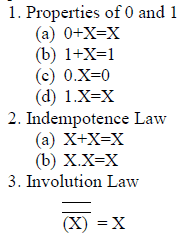 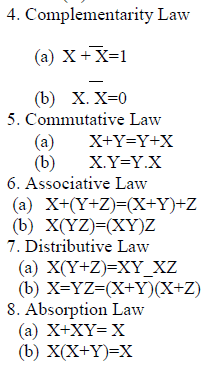 Some other rules of Boolean algebra

Minterm :
minterm is a Product of all the literals within the logic System.
Step involved in minterm expansion of Expression
1. First convert the given expression in sum of product form.
2. In each term is any variable is missing(e.g. in the following example Y is missing in first term and X is missing in second term), multiply that term with (missing term +complement( missing term) )factor e.g. if Y is missing multiply with Y+Y” )
3. Expand the expression .
4. Remove all duplicate terms and we will have minterm form of an expression.

Other procedure for expansion could be
1. Write down all the terms
2. Put X‟s where letters much be inserted to convert the term to a product term
3. Use all combination of X‟s in each term to generate minterms
4. Drop out duplicate terms

Shorthand Minterm notation:
Since all the letters must appear in every product, a shorthand notation has been developed that saves actually writing down the letters themselves. To form this notation, following steps are to be followed:
1. First of all, Copy original terms
2. Substitute 0s for barred letters and 1s for nonbarred letters
3. Express the decimal equivalent of binary word as a subscript of m.
Rule1. Find Binary equivalent of decimal subscript e.g.,for m6 subscript is 6, binary equivalent of 6 is 110.
Rule 2. For every 1s write the variable as it is and for 0s write variables complemented form i.e., for 110 t is XYZ. XYZ is the required minterm for m6.

maxterm:
A maxterm is a sum of all the literals (with or without the bar) within the logic system. Boolean Expression composed entirely either of Minterms or Maxterms is referred to as Canonical Expression.

Canonical Form:
Canonical expression can be represented is derived from
(i) Sum-of-Products(SOP) form
(ii) Product-of-sums(POS) form

Sum of Product (SOP)
1. Various possible input values
2. The desired output values for each of the input combinations

Product of Sum (POS)
When a Boolean expression is represented purely as product of Maxterms, it is said to be in Canonical Product-of-Sum from of expression.

1.Algebraic method:This method makes use of Boolean postulates, rules and theorems to simplify the
expression.
Example No. 1: Reduce the expression 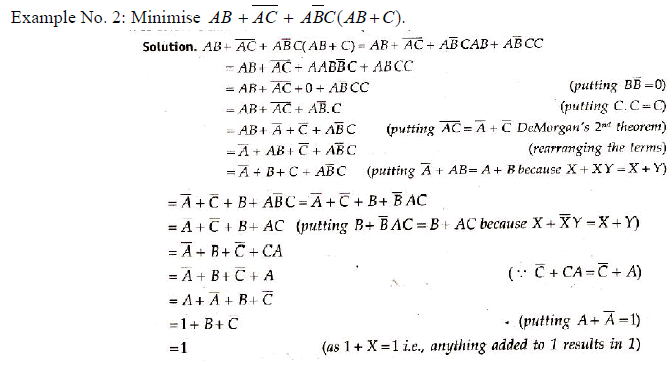 2. Using Karnaugh Map :
Karnaugh Maps:
Karnaugh map or K Map is a graphical display of the fundamental product in a truth table.
For example: Remember, group together adjacent cells of 1s, to form largest possible rectangles of sizes that are  powers of 2. Notice that you can overlap the blocks if necessary.

In the above Ex

Step 1 : In K Map while moving from m7 to m15 the variable A is changing its state Hence it can be removed directly, the solution becomes B.CD = BCD. This can be continued for all the pairs, Quads, and Octets. 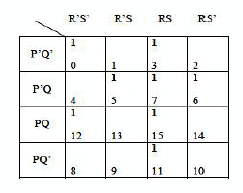 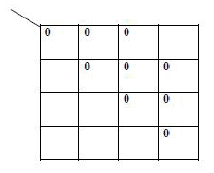 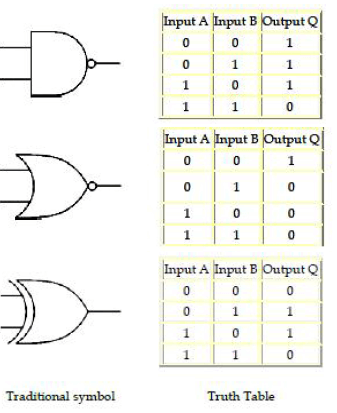 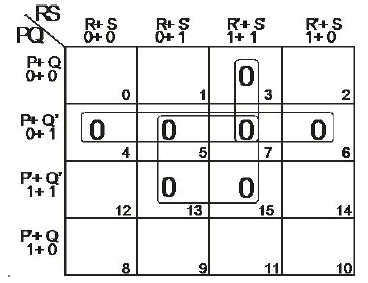