The document Chapter - 7 Coordination Compounds Class 12 Notes | EduRev is a part of the Class 12 Course Chemistry Class 12.
All you need of Class 12 at this link: Class 12

Addition Compounds : They are formed by the combination of two or more stable compounds in stoichiometric ratio. These are(1) Double salts and(2) Coordination compounds

Double salts : Those addition compounds which lose their identity in solutionse.g. K2SO4 ,AI2(SO4)3

Central Atom/Ion : In a coordination entity-the atom/ion to which are bound a fixed number of ligands in a definite geometrical arrangement around it.

Ligands : The neutral molecules, anions or cations which are directly linked with central metal atom or ion in the coordination entity are called ligands.

Ambidentate Ligand: Ligands which can ligate through two different atoms present in it

Coordination Number: The number of ligand donor atoms to which the metal is directly attached. 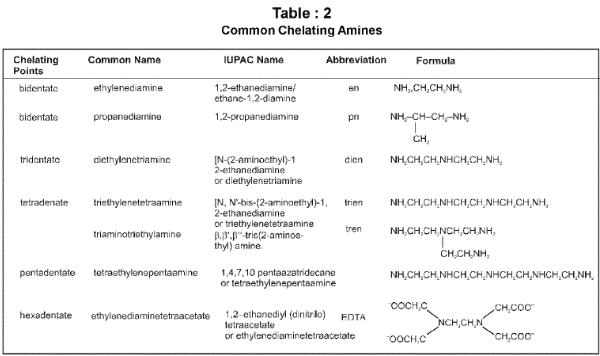 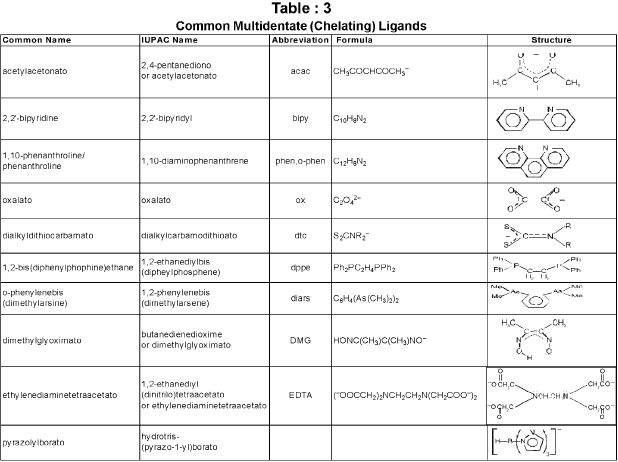 Nomenclature of Coordination Compounds: Writing the formulas of Mononuclear Coordination Entities :(i) The central atom is placed first.(ii) The ligands are then placed in alphabetical order. The placement of a ligand in the list does not depend on its charge.(iii) Polydentate ligands are also placed alphabetically. In case of abbreviated ligand, the first letter of the abbreviation is used to determine the position of the ligand in the alphabetical order.(iv) The formula for the entire coordination entity, whether charged or not, is enclosed in square brackets. When ligands are polyatomic, their formulas are enclosed in parentheses. Ligands abbreviations are also enclosed in parentheses.(v) There should be no space between the ligands and the metal within a coordination sphere.(vi) When the formula of a charged coordination entity is to be written without that of the counter ion, the charge is indicated outside the square brackets as a right superscript with the number before the sign. For example, [Co(H2O)6]3+, [Fe(CN)6]3- etc.(vii) The charge of the cation(s) is balanced by the charge of the anion(s).

Writing the name of Mononuclear Coordination Compounds :(i) Like simple salts the cation is named first in both positively and negatively charged coordination entities.(ii) The ligands are named in an alphabetical order (according to the name of ligand, not the prefix) before the name of the central atom/ion.(iii) Names of the anionic ligands end in -o and those of neutral ligands are the same except aqua for H2O, ammine for NH3, carbonyl for CO, thiocarbonyl for CS and nitrosyl for NO. But names of cationic ligands end in-ium.(iv) Prefixes mono, di, tri, etc., are used to indicate the number of the one kind of ligands in the coordination entity. When the names of the ligands include a numerical prefix or are complicated or whenever the use of normal prefixes creates some confusion, it is set off in parentheses and the second set of prefixes is used.

(v) Oxidation state of the metal in cation, anion or neutral coordination entity is indicated by Roman numeral in the parentheses after the name of metal.(vi) If the complex ion is a cation, the metal is named same as the element. For example, Co in a complex cation is called cobalt and Pt is called platinum. If the complex ion is an anion, the name of the metal ends with the suffix - ate. For example, Co in a complex anion, [Co(SCN)4]2- is called cobaltate. For some metals, the Latin names are used in the complex anions.

(vii) The neutral complex molecule is named similar to that of the complex cation.

Werner's Theory: According to Werner most elements exhibit two types of valencies :(a) Primary valency and(b) Secondary valency.(a) Primary valency : This corresponds to oxidation state of the metal ion. This is also called principal, ionisable or ionic valency. It is satisfied by negative ions and its attachment with the central metal ion is shown by dotted lines.(b) Secondary or auxiliary valency : It is also termed as coordination number (usually abbreviated as CN) of the central metal ion. It is non-ionic or non-ionisable (i.e. coordinate covalent bond type). In the modern terminology, such spatial arrangements are called coordination polyhedra and various possibilities areC.N. = 2 linearC.N. = 3 TriangularC.N. = 4 tetrahedral orsquare planarC.N. = 6 octahedral.

Valence bond theory: The model utilizes hybridisation of (n-1) d, ns, np or ns, np, nd orbitals of metal atom or ion to yield a set of equivalent orbitals of definite geometry to account for the observed structures such as octahedral, square planarand tetrahedral, and magnetic properties of complexes. The number of unpaired electrons, measured by the magnetic moment of the compounds determines which d-orbitals are used.Table: 5

Coordination Number Six : In the diamagnetic octahedral complex, [Co(NH3)6]3+, the cobalt ion is in +3 oxidation state and has the electronic configuration represented as shown below.

The complex [FeF6]4- is paramagnetic and uses outer orbital (4d) in hybridisation (sp3d2) ; it is thus called as  outer orbital or high spin or spin free complex. So,

Coordination Number Four: In the paramagnetic and tetrahedral complex [NiCI4]2- the nickel is in +2 oxidation state and the ion has the electronic configuration 3d8. The hybridisation scheme is as shown in figure.

Similarly complex [Ni(CO)4] has tetrahedral geometry and is diamagnetic as it contains no unpaired electrons. The hybridisation scheme is as shown in figure.

The hybridisation scheme for [Ni(CN)4]2- is as shown in figure.

It suffers from the following shortcomings :

Bohr Magneton ; n = number of unpaired electronsFor metal ions with upto three electrons in the d-orbitals like Ti3+, (d1) ; V3+ (d2) ; Cr3+ (d3) ; two vacant d-orbitals are easily available for octahedral hybridisation. The magnetic behaviour of these free ions and their coordination entities is similar. When more than three 3d electrons are present, like in Cr2+ and Mn3+ (d4) ; Mn2+ and Fe3+ (d5) ; Fe2+ and Co3+ (d6) ; the required two vacant orbitals for hybridisation is not directly available (as a consequence of Hund’s rules). Thus, for d4, d5 and d6 cases, two vacant d-orbitals are only available for hybridisation as a result of pairing of 3d electrons which leaves two, one and zero unpaired electrons respectively.

Crystal Field Theory: The crystal field theory (CFT) is an electrostatic model which considers the metal-ligand bond to be ionic arising purely from electrostatic interaction between the metal ion and the ligand.

The crystal field splitting, Δ0, depends upon the fields produced by the ligand and charge on the metal ion.Ligands can be arranged in a series in the orders of increasing field strength as given be low :I- < Br- < SCN- < Cl- < S2- < F- < OH- < C2O2-4 < H2O < NCS- < edta4- < NH3 < en < NO2- < CN- < COSuch a series is termed as spectrochemical series. It is an experimentally determined series based on the absorption of light by complexes with different ligands.Calculation of Crystal Field stabilisation energy (CFSE)Formula : CFSE = [- 0.4 (n) t2g + 0.6 (n') eg] Δ0+ *nP.where n & n' are number of electron(s) in t2g & eg orbitals respectively and Δ0 crystal field splitting energy for octahedral complex. *n represents the number of extra electron pairs formed because of the ligands in comparison to normal degenerate configuration.

COLOUR IN COORDINATION COMPOUNDS : According to the crystal field theory the colour is due to the d-d transition of electron under the influence of ligands. We know that the colour of a substance is due to the absorption of light at a specific wavelength in the visible part of the electromagnetic spectrum (400 to 700 nm) and transmission or reflection of the rest of the wavelengths.Limitations of crystal field theory (1) It considers only the metal ion d-orbitals and gives no consideration at all to other metal orbitals (such as s, px, py and pz orbitals).(2) It is unable to account satisfactorily for the relative strengths of ligands. For example it gives no explanation as to why H2O is a stronger ligand than OH- in the spectrochemical series.(3) According to this theory, the bond between the metal and ligands are purely ionic. It gives no account on the partly covalent nature of the metal ligand bonds.(4) The CFT cannot account for the rc-bonding in complexes.

STABILITY OF COORDINATION COMPOUNDS :The stability of a coordination compound [MLn] is measured in terms of the stability constant (equilibrium constant) given by the expression,βn = [MLn]/[M(H2O)n][L]n

for the overall reaction :M(H2O)n + nL ⇌ MLn + nH2OBy convention, the water displaced is ignored, as its concentration remains essentially constant. The above overall reaction takes place in steps, with a stability (formation) constant, K1, K2, K3, ......Kn for each step as represented below:

βn, the stability constant, is related to thermodynamic stability when the system has reached equilibrium.

ISOMERISM :(1) STRUCTURAL ISOMERISM :(A) Ionisation isomerism: This type of isomerism occurs when the counter ion in a coordination compound is itself a potential ligand and can displace a ligand which can then become the counter ion.[C0(NH3)5SO4]NO3 and [Co(NH3)5NO3]SO4(B) Solvate / hydrate isomerism : It occurs when water forms a part of the coordination entity or is outside it.

(C) Linkage isomerism: In some ligands, like ambidentate ligands, there are two possible coordination sites. In such cases, linkage isomerism exist, e.g.,For example : [Co(ONO)(NH3)5] Cl2 & [Co(NO2) (NH3)5] Cl2.(D) Coordination isomerism: Coordination compounds made up of cationic and anionic coordination entities show this type of isomerism due to the interchange of ligands between the cation and anion entities. Some of the examples are : [Co(NH3)6][Cr(CN)6] and [Cr(NH3)6](Co(CN)6](E) Ligand isomerism : Since many ligands are organic compounds which have possibilities for isomerism, the resulting complexes can show isomerism from this source.(F) Polymerisation isomerism: Considered to be a special case of coordination isomerism, in this the various isomers differ in formula weight from one another, so not true isomers in real sense.

Square planar complex of the type Ma2be (where a, b, c are unidentates) shows two geometrical isomers.

Square planar complex of the type Mabcd (where a, b, c, d are unidentates) shows three geometrical isomers. 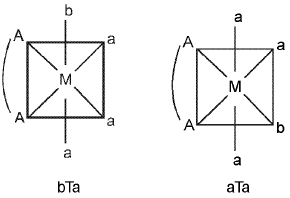 Optical Isomerism: A coordination compound which can rotate the plane of polarised light is said to be optically active.Octahedral complex :Optical isomerism is common in octahedral complexes involving didentate ligands. For example, [Co(en)3]3+ has d and l forms as given below.

The M — Cπ bond is formed by the donation of a pair of electrons from a filled d orbital of metal into the vacant antibonding π* orbital of carbon monoxide. Thus carbon monoxide acts as σ donor (OC → M) and a π acceptor (OC ← M), with the two interactions creating a synergic effect which strengthens the bond between CO and the metal as shown in figure.