The entropy of a system is a thermodynamic property which is a measure of the degree of molecular disorder existing in the system. It describes the randomness or uncertainity of the system, It ios a function of a quantity of heat which shows the possibility of conversion of heat into work. Thus, for maximum entropy, there is minimum availability for conversion into work and for minimum entropy there is a maximum availability for conversion into work. 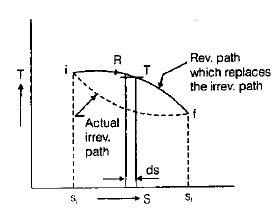 Thus a reversible adiabatic process is an isentropic process.

At a temperature, To

The Clausius theorem (1855) states that a system (heat engine or heat pump) exchanging heat with external reservoirs and undergoing a cyclic process, is one that ultimately returns a system to its original state,

For an isolated reversible system

For an isolated irreversible system

The total entropy of an isolated system can never decrease over time, and is constant if and only if all processes are reversible. Isolated systems spontaneously evolve towards thermodynamic equilibrium, the state with maximum entropy.• It is also a statement of second law of thermodynamics.• Entropy increase of the isolated system is a measure of the extent of irreversibilityof the process under gone by the system.• When the system is at equilibrium, any conceivable change in entropy would bezero.Application of entropy principle• Transfer of heat through a finite Temperature difference. 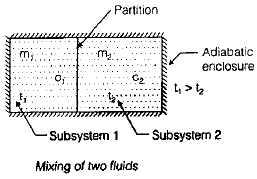 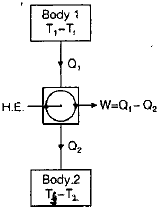 with maximum delivery of work.