The limiting values of Reynold’s Number corresponding to which flow is Laminar is given by : 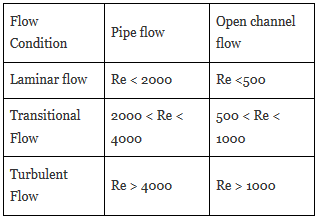 -It is often necessary  to  determine  the  head  loss, hl , that occur in a pipe flow so that the energy equation, can be used in the analysis of pipe flow problems.-The  overall head loss for the pipe  system consists of the head loss due to viscous effects  in the straight pipes, termed the major loss and denoted hL-major.-The head loss in various pipe components, termed the minor loss and denoted hL-minor.That is ; hl =  hL-major+ hL-minor-The  head  loss  designations  of  “major”  and  “minor” do not necessarily reflect the  relative  importance  of  each type of loss.-For  a  pipe  system  that  contains  many  components and a relatively short length of  pipe, the minor loss may actually be larger than the major loss.

If value of Cc is not given, then the loss due to countraction is taken as 0.5

KL depends upon angle of expansion.

(i) Discharge remains constant through all pipes.(ii) Ignoring secondary losses the total loss of head is equal to the sum of the friction losses in the individual pipes.

Pipes are said to be in parallel when they are so connected that the flow from a pipe branches or divides into two or more separate pipes and then reunite into a single pipe.Suppose a main pipe branched at section 1-1 into two pipes of lengths l1 and l2 and diameters d1 and d2 and unite again at a section 2-2 to form a single pipe. 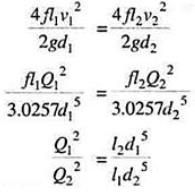 Hence the total discharge Q divides into components Q1 and Q2 satisfying the above equation.

-Power input to pump = g Q(H + hL)/h-Power output in turbine = g Q(H – hL)h-Power delivered by a given pipeline is maximum when the flow is such that one third of static head is consumed in pipe friction. Thus efficiency is limited to only 66.66%.

It shows that pressure head at points B and D  is zero.The pressure head in the region BCD where pipe is above H.G.L. is negative. The minimum pressure would be at point C(summit point).  If the absolute pressure at point C reache vapour pressure, gases, vapour bubbles are liberated and cavitation occurs.For water,the maximum height of summit above H.G.L. at normal temperature and pressure is 7.8 m.The discharge through a siphon may be calculated as

The siphon will start functioning only when it is primed, air is removed from it.

Uses of siphon1.To carry away water from one reservoir to another reservoir separated by a hill orridge.2.To take out the liquid from a tank which is not having any outlet.3.To empty a channel not provided with any outlet sluice.

-Consider a long pipe AB as shown in Fig. below connected at one end to a tank containing water at a height of H from the centre of the pipe. At the other end of the pipe, a valve to regulate the flow of water is  provided. When the valve is completely open, the water is flowing with a velocity, V in the pipe.-If the valve is suddenly closed, the momentum of the flowing water will be destroyed and consequently a wave of high pressure will be set up. This wave of high pressure will be transmitted along the pipe with a velocity equal to the velocity of sound wave and may create noise called knocking.  Also this wave of high pressure has the  effect of hammering action on the walls of the pipe and hence it is known as water hammer.

In this case the pressure head is given by

where,L = Length of pipeV = Velocity of flow t = time in second to close to close the valve.

D = Diameter of pipet = Thickness of pipeE = Modulus of elasticity of pipe material(In deriving the above equation, the Poisson’s ratio of pipe material is assumed as 0.25.)