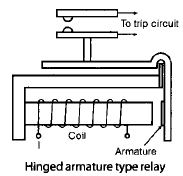 Where q is the phase difference between f1 and f2. The flux f2 leads f1 by q. 

Voltages induced in the rotor

Moving Coil Relay This type of a relay has a permanent magnet and a moving coil. It is also called a permaent magnet d.c. moving coil relay. The actuating current flows in the moving coil. Remember:  A reactance relay is an over-current relay with directional restrained.

For the operation of the relay 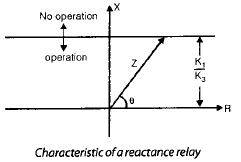 MHO Relay It measures a particular component of the

For the relay to operate A relay which operates in response to the difference of two actuating quantities.  Merz-Price Protection It is modifed by biasing the relay. This is commonly known as percentage differential protection.

Where nr is the number of turns in the restraining coil.

OVER CURRENT RELAYA relay which operates when the actuating current exceeds a certain preset value (its pick-up value). Whenever a fault takes place in a transformer the oil of the tank gets overheated and gases are formed.