From which we can writem therefore, the transfer function of the network becomes

Since β >1, the steady state output has a lagging phase angle with respect to the sinusoidal input and hence the name lag network. 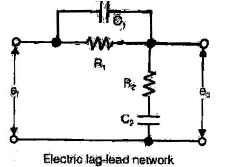 Note: For lead lag compensator the position of compensating poles and zeros of lag lead compensator can be interchanged.

Note: The output of controller can be predicted on the basis of knowledge of the slope of error.

Note: PD controller is anticipatory because it is having derivative action also.