Chapter 8 Stress Distribution in the Soil

VERTICAL STRESS:Stress is induced in a soil mass due to weight  of overlying soil and due to applied load. This is called vertical stress. Stress in the soil may be caused by:1. Self weight of soil2.Applied load of soil

BOUSSINESQ’S THEORYAssumption:1. Soil mass is homogeneous, elastic and isotropic2. Soil mass is semi-infinite (Surface in infinite but depth to finite)3. Soil is weight less unstressed before application of load. (Self weight of soil is ignored)4. No change in volume of soil takes place due to applical of the loads.Boussinesq (1985) evolved equations that can be used to determine stresses at any point P at a depth z as a result of a surface point load. At point P of above figure due to a point load Q,

where,r = the horizontal distance between an arbitrary point P below the surface and the vertical axis through the point load Q.z = the vertical depth of the point P from the surface.IB=Boussinesq stress coefficient =

This intensity of vertical stress directly below the point load, on its axis of loading (r=0) is given by:

WESTERGAARD’S THEORY:Assumptions:(1) The soil is elastic and semi-infinite.(2) Soil is composed of numerous closely spaced horizontal layers of negligible thickness of an infinite rigid material.(3) The rigid material permits only the downward deformation of mass in which horizontal deformation is zero. 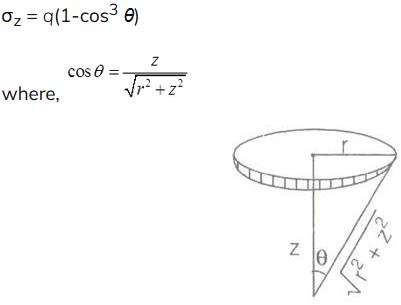 where, NA = Total number of sectorial area of Newmark’s chart. 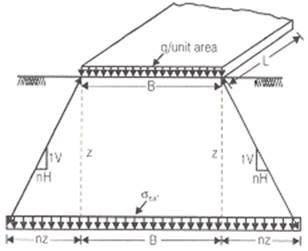 (iii) Stress Isobar method : Area Bounded by 0.2q stress isobar is considered to be stressed by vertical stress on loading.