Remember:  The arc will extinguished if the dielectric strength increases more rapidly than the restriking voltage. 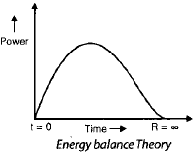 Restriking Voltage The transient voltage which appears across the breaker contacts at the instant of arc being extinguished is known as restriking voltage.

Recovery Voltage The power frequency rms voltage, which appears across the breaker contacts after the arc is finally extinguished and transient oscillations die out is called recovery voltage.

Expression for Restriking Voltage and RRV 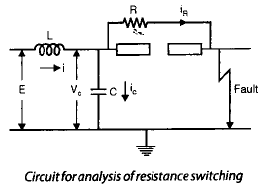 there will to be notransient oscillation.

if i is the instantaneous value of the current which is interrupted. This will appear in the form of electrostatic energy equal to

These two energies will be equal 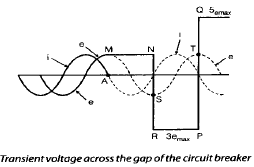 At this moment, the breaker may restrike. If the arc restrikes, the voltage across the gap becomes practically zero.

The voltage oscillates about point S between R and N, i.e. between –3emax and emax.

Hence, the arc energy is absorbed in decomposing the oil.