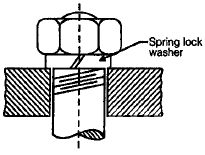 where, b = width of the thread section at the root.The average thread shearing stress for nut is

n = number of threads in engagement