What does it mean to be Socially Marginalised:

(i) To be marginalized it t be forced to occupy the sides or fringes and thus not be at the centre of things.

(ii) Sometimes marginalized groups are viewd with hostility and fear.

iii) To make certain groups in society feel marginalized, there are economic, social, cultural and political factors. Thus, marginalization is seldom experienced in one sphere. 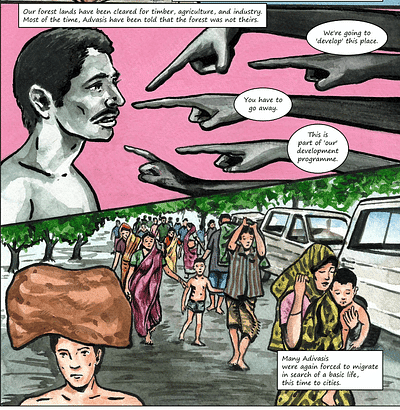 (i) The term ‘Adivasis’ refers to the original inhabitants.

(ii) Adivasis are communities who lived and often continue to live in close association with forests.

(iv) Adivasis practice a range of tribal religions that are different from Islam, Hinduisma and Christianity.

(v) Adivasis worship ancestors, own village and nature spirits. They have been influenced by different religions, like Shakta, Buddhist, Vaishnav, Bhakti and Christianity.

(vi) Adivasis have their own languages, Santhali has the largest number of speakers and has a significant body of publication.

i) Adivasis are invariably portrayed in very stereotypical ways-in colourful costumes,headgear and through their dancing.

ii) Adivasis are blamed for their lack of advancement as they are believed to be resistant to change or new ideas.

iii) People believe that the Adivasis have a primitive background.

(i) Forests play a crucial role in the development of all empires and settled civilization in India.

(ii) Adivasis had deep knowledge of forest. Often empires heavily depended on Adivasis for the crucial access to forest resources.

iv) In the pre-colonial world, they were traditionally ranged hunter-gatherers and nomads and they lived by shifting agriculture and cultivating at one place.

(v) For the past two hundred years, Adivasis have been forced through economic changes, forest policies and political force applied by State to migrate as workers in plantations, industries and as domestic workers.

vi) Forest lands have been cleared for timber and to get land for agriculture and industry.

vii) Huge tracts of lands have gone under the waters of hundreds of dams that have been built in independent India.

(viii) Losign their lands and access to the forests means that tribals lose their main source of livelihood and Adivasis have migrated to cities in search of work.

(ix) They get caught in the cycle of poverty and deprivation. Almost 45% of tribal groups in rural areas and 35% in urban areas live below the poverty line.

i) The term minority is most commonly used to refer to communities that are numerically small in relation to the rest of the population.

ii) Safeguards are needed to protect minority communities against the possibility of being culturally dominated by the majority.

iii) The Constitution provides these safeguards because it is committed to protecting India’s cultural diversity and promoting equality as well as justice.

(i) Muslims are 13.4% of India’s population and are considered to be a marginalized community in India.

iii) Recognizing that Muslims in India were lagging behind in terms of various development in indicators, the government set up a high-level committee in 2005.

iv) The report of the community suggests that Muslim community is comparable to that of other marginalized communities like Scheduled Castes and Scheduled Tribes.

v) Muslim customs and practices such as wearing burqa and fez make them different from others. Because of this, they tend to be identified differently and some people think they are not like the ‘rest of us’. This often becomes an excuse to treat them unfarily.

(vi) This social marginalization of Muslims in some instances has led to their migration from places where they have lived, often leading to the ghettorisation of the community.

(i) In India, there are several more marginalized communities like Dalits.

(ii) Marginalized communities want to maintain their cultural distinctiveness while having access to rights, development and other opportunities.