The document Chapter Notes -2, Reproduction in Animals, Class 8 | EduRev Notes is a part of the Class 8 Course Science Class 8.
All you need of Class 8 at this link: Class 8 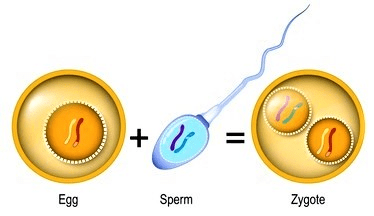 The male reproductive organs include a pair of testes (singular, testis), two sperm ducts and a penis. The testis produces the male gametes called sperms. Millions of sperms are produced by the testes. Though sperms are very small in size, each has a head, a middle piece and a tail. Each sperm is a single cell with all the usual cell components.

The female reproductive organs are a pair of ovaries, oviducts (fallopian tubes) and the uterus. Ovary produces female gametes called ova (eggs). In human beings, a single matured egg is released into the oviduct by one of the ovaries every month. Uterus is the part where development of the baby takes place. Like the sperm, an egg is also a single cell.

The first step in the process of reproduction is the fusion of a sperm and an ovum. When sperms come in contact with an egg, one of the sperms may fuse with the egg. Such fusion of the egg and the sperm is called fertilization. During fertilization, the nuclei of the sperm and the egg fuse to form a single nucleus. This results in the formation of a fertilized egg or zygote.

During spring or rainy season, frogs and toads move to ponds and slow flowing streams. When the male and female come together in water, the female lays hundreds of eggs. Unlike hen’s egg, frog’s egg is not covered by a shell and it is comparatively very delicate. A layer of jelly holds the eggs together and provides protection to the eggs.

As the eggs are laid, the male deposits sperms over them. Each sperm swims randomly in water with the help of its long tail. The sperms come in contact with the eggs. This results in fertilization. This type of fertilization in which the fusion of a male and a female gamete takes place outside the body of the female is called external fertilization. It is very common in aquatic animals such as fish, starfish, etc.

Fertilization results in the formation of zygote which begins to develop into an embryo. The zygote divides repeatedly to give rise to a ball of cells. The cells then begin to form groups that develop into different tissues and organs of the body. This developing structure is termed an embryo. The embryo gets embedded in the wall of the uterus for further development.

The embryo continues to develop in the uterus. It gradually develops the body parts such as hands, legs, head, eyes, ears, etc. The stage of the embryo in which all the body parts can be identified is called a foetus. When the development of the foetus is complete, the mother gives birth to the baby.

In animals which undergo external fertilization, development of the embryo takes place outside the female body. The embryos continue to grow within their egg coverings. After the embryos develop, the eggs hatch.

This type of reproduction in which only a single parent is involved is called asexual reproduction. • Reproduction resulting from the fusion of male and female gametes is called sexual reproduction.

• The reproductive organs in the female include ovaries, oviducts and uterus.

• The reproductive organs in male include testes, sperm ducts and penis.

• The fusion of ovum and sperm is called fertilization. The fertilized egg is called a zygote.

• Fertilization that takes place inside the female body is called internal fertilization. This is observed in human beings and other animals such as hens, cows and dogs.

• Fertilization that takes place outside the female body is called external fertilization. This is observed in frogs, fish, starfish, etc.

• The zygote divides repeatedly to give rise to an embryo.

• The embryo gets embedded in the wall of the uterus for further development.

• The stage of the embryo in which all the body parts are identifiable is called foetus.

• Animals such as human beings, cows and dogs which give birth to young ones are called viviparous animals.

• Animals such as hen, frog, lizard and butterfly which lay eggs are called oviparous animals.

• The transformation of the larva into adult through drastic changes is called metamorphosis.

• The type of reproduction in which only a single parent is involved is called asexual reproduction.

• In hydra, new individuals develop from buds. This method of asexual reproduction is called budding.

• Amoeba reproduces by dividing itself into two. This type of asexual reproduction is called binary fission.