The document Chapter Notes - Law and Social Justice Class 8 Notes | EduRev is a part of the Class 8 Course Social Studies (SST) Class 8.
All you need of Class 8 at this link: Class 8 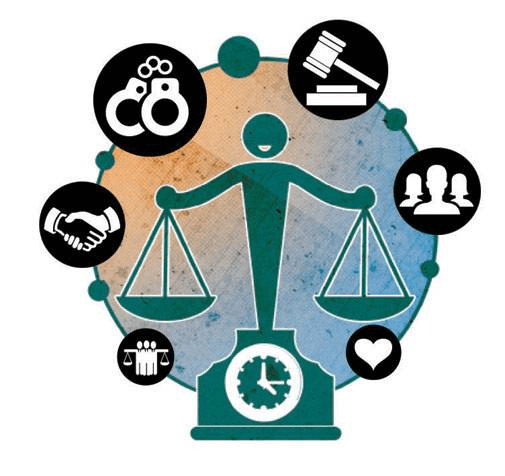 (i)  The world’s worst industrial tragedy took place in Bhopal 24years ago.

(ii) Union Carbide (UC) an American company had a factory in the city in which it produced pesticides. MIC, a highly poisonous gas, started leaking on 2December 1984, at midnight from the factory.

(iii) Within three days more than 8,000 people were dead, Hundreds of thousands were maimed.

(iv) Us stopped its operations but left behind tons of toxic chemicals.

(v) 24 years later, people are still fighting for justice, for safe drinking water, for healthcare facilities and jobs for the people poisoned by UC.

What is a Worker’s worth:

(i) Foreign companies come to India for cheaper labour.

(ii) Wages in USA are higher than that compared to workers in poorer countries like in India.

(iii) For lower pay, companies can get longer hours of work.

(iv) Cost cutting can be done by other more dangerous means, e.g., lower working conditions including lower safety measures are used as ways of cutting costs.

(v) Since there is as much unemployement, there are many workers who are willing to work in unsafe conditions in return for a wage.

(i) As the lawmaker and enforcer, the government is supposed to ensure that safety laws are implemented.

(ii) It is the duty of the government to ensure that the Right to Life guaranteed under Article 21of the Constitution is not violated.

(iii) Instead of protecting the interests of the people, their safety was being disregared both by the government and by private companies.

(iv) With more industries being set up both by local and foreign business in India, there is a great need for stronger laws protecting workers rights and better enforcement of these laws.

New Laws to Protect the Environment:

(i) In 1984, there were very few laws protecting environment in India and there was hardly any enforcement of these laws.

(ii) Environment was treated as a ‘free’ entity and industry could pollute the air and water without any restricted.

(iii) Whether it was our rivers, air or groundwater the environment was being polluted and the health of people disregarded.

(iv) The polluter was to be held accountable for the damage done to environment.

(v) The Government is responsible for setting up laws and procedures that can check pollution, clean rivers and introduce heavy fines for those who pollute.

Environment as a Public Facility:

i) Environment issue in India has highlighted the fact that the growing concern for the environment among the middle classes is often at the expense of the poor.

ii) The challenge is to look for solutions where everyone can benefit from a clean environment.

iii) The government has to encourage and support factories to gradually move to cleaner technologies.

iv) This will ensure that the workers livelihoods are protected and both workers and communities living around the factories enjoy a safe environment.

(i) Laws are necessary in many situations, whether this be the market, office or factory so as to protect people from unfair practices.

(ii) Laws that are weak and poorly enforced can cause serious harm.

(iii) While the government has a leading role in the respect, people can exert pressure so that both private companies and the government act in the interests of society.