The document Chapter Notes (Part - 1) - Resources Class 8 Notes | EduRev is a part of the Class 8 Course Social Studies (SST) Class 8.
All you need of Class 8 at this link: Class 8

POWER RESOURCESPower or energy plays a vital role in our lives. We also need power for industry, agriculture, transport, communication and defense. Power resources may be broadly categorized as conventional and non-conventional resources. 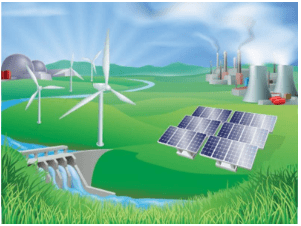 Conventional Sources: Conventional sources of energy are those which have been in common use for a long time. Firewood and fossil fuels are the two main conventional energy sources.Firewood:It is widely used for cooking and heating. In our country more than fifty per cent of the energy used by villagers comes from fire wood. Remains of plants and animals which were buried under the earth for millions of years got converted by the heat and pressure into fossil fuels. Fossil fuels such as coal, petroleum and natural gas are the main sources of conventional energy. This is the most abundantly found fossil fuel. It is used as a domestic fuel, in industries such as iron and steel, steam engines and to generate electricity. Electricity from coal is called thermal power. The leading coal producers of the world are China, USA, Germany, Russia, South Africa and France. The coal producing areas of India are Raniganj, Jharia, Dhanbad and Bokaro in Jharkhand. It is found between the layers of rocks and is drilled from oil fields located in off shore and coastal areas. This is then sent to refineries which process the crude oil and produce a variety of products like diesel, petrol, kerosene, wax, plastics and lubricants. Petroleum and its derivatives are called Black Gold as they are very valuable. The chief petroleum producing countries are Iran, Iraq, Saudi Arabia and Qatar. The other major producers are USA, Russia, Venezuela, and Algeria. The leading producers in India are Digboi in Assam, Bombay High in Mumbai and the deltas of Krishna and Godavari rivers. Natural gas is found with petroleum deposits and is released when crude oil is brought to the surface. It can be used as a domestic and industrial fuel. Russia, Norway, UK and the Netherlands are the major producers of natural gas. In India Jaisalmer, Krishna Godavari delta, Tripura and some areas off shore in Mumbai have natural gas resources.Hydro PowerRain water or river water stored in dams is made to fall from heights. The falling water flows through pipes inside the dam over turbine blades placed at the bottom of the dam. The moving blades then turn the generator to produce electricity. This is called hydro electricity. The water discharged after the generation of electricity is used for irrigation. One fourth of the world’s electricity is produced by hydro power. The leading producers of hydro power in the world are Paraguay, Norway, Brazil, and China. Some important hydro power stations in India are Bhakra Nangal, Gandhi Sagar, Nagarjunsagar and Damodar valley projects.